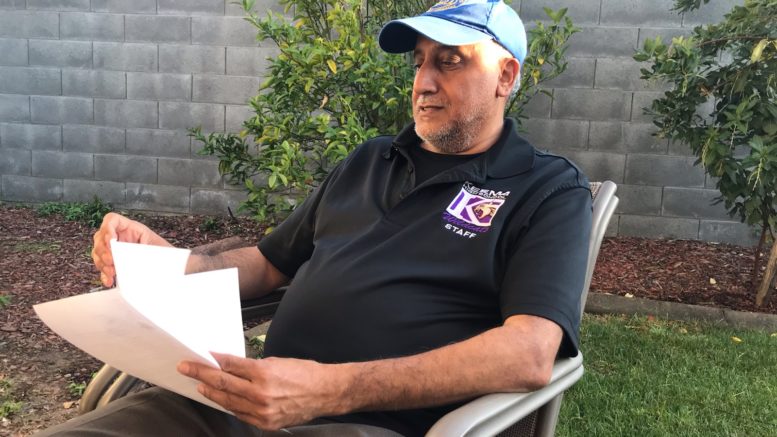 Mohamed Bashamak, a veteran math teacher at MLK Tech Academy and Keema High School, looks over his awards and citations for excellence in his backyard. Photo by Scott Thomas Anderson

When Mohamed Bashamak immigrated from Ethiopia in 1981, it started him on a long path to teaching in public schools, a rewarding and engaging career that he’s come to cherish.

But lately, Bashamak says his American Dream has come with an ugly asterisk: He has a case pending against the Twin Rivers Unified School District at California’s Public Employment Relations Board in which Bashamak claims that district officials retaliated against him for looking out for his students and trying to shield colleagues from a hostile work environment

Teacher of the year, but not ‘one of our best?’

Bashamak started teaching math at Martin Luther King Jr. Technology Academy in 1999. Five years later, he was named its Teacher of the Year. A decade after that, Bashamak was assaulted by a student on campus, which led to severe anxiety issues. For a long time, Bashamak treated the anxiety as his own private struggle, though he says Twin Rivers has now forced him to speak publicly about it.

After the assault, Bashamak transferred to Keema High School, a TRUSD independent study campus where teachers work one-on-one with students. He was named Keema’s Teacher of the Year in 2016. But Bashamak saw possible improvements, and one involved Robert Pope, then a lab teacher and now Keema’s principal. Bashamak says he didn’t agree with the math standards Pope was using and also didn’t like the way Pope sometimes talked about other employees. Later, when Bashamak learned that Pope was under consideration for principal, he contacted Twin Rivers trustee Rebecca Sandoval to express reservations.

Bashamak now believes that interaction made its way back to Pope, who was made his boss.

Twin Rivers Unified School District did not provide SN&R with an opportunity to interview Pope, nor did it respond to numerous questions emailed to its public information officer. But there is one parent who says she’s sure the principal had a negative attitude toward Bashamak.

In 2017, Stacy Van Hoose’s daughter was studying math with Bashamak at Keema. She was progressing so well that the family hoped Bashamak could continuing teaching her the following year, though it was told that wasn’t possible because of Bashamak’s schedule.

Van Hoose met with Pope on July 31, 2017 to make her case in person. She later wrote a letter to district officials, obtained by SN&R, detailing how unsettling she says the encounter was. Van Hoose wrote that Pope not only wouldn’t help, but he bad-mouthed Bashamak and revealed private medical information about him.

“[Pope] brought out a binder and shared with me a form filled out with Mr. Bashamak’s name and in his handwriting,” Van Hoose wrote. “It was signed and dated … and further stated ‘anxiety’ at the bottom portion of the form.  Mr. Pope went on to say that Mr. Bashamak was not one of his best teachers … Mr. Pope suggested that [my daughter] change teachers, even though I repeatedly expressed the success and progress that [she] had presented while having Mr. Bashamak as her teacher.”

Van Hoose said she still vividly remembers Pope’s behavior. “That just further sent red flags up for me,” Van Hoose said. “That’s a breach of confidentiality. A parent should absolutely never be shown something like that.”

Van Hoose soon told Bashamak what Pope had said about him. The teacher’s problems at Keema only got worse, though he didn’t stop speaking his mind. On Feb. 13, 2018, he sent an email to Gina Carreon, associate superintendent of human resources and labor relations, voicing concerns about student safety issues on the campus, as well as his fear that students were being unnecessarily “dumped in remedial math” courses. In the email, viewed by SN&R, Bashamak also stressed that Keema had an environment of “favoritism and double-standards.”

Then, Bashamak said he witnessed an incident with Pope that compelled him to speak up more. On May 10, 2018, Pope called the police on a 15-year-old female student in Bashamak’s classroom. Bashamak says that Pope had decided the student shouldn’t be attending Keema any more due to behavioral issues. The principal had a Twin Rivers police officer walk the girl off campus for “trespassing.” Bashamak said he watched it all happen. Van Hoose, who is friends with that girl’s family, confirmed the incident.

Bashamak said he believes that Pope’s actions violated the state Education Code because the student was not an immediate threat herself or others. Bashamak sent an email to district officials decrying what he described as his student’s humiliating experience. A month later, Bashamak agreed to act as a material witness on behalf of the student and her family as the district conducted an internal inquiry.

On December 6, 2018, district officials suddenly offered to put him on paid administrative leave until the end of year in exchange for him retiring at the start of the next. The offer, obtained by SN&R, was made through Bashamak’s union, Twin Rivers United Educators.

“I wasn’t going to do that,” Bashamak recalled. “I said, ‘I didn’t do anything wrong, why would I retire?’”

Three months later, despite the years of accolades and testimonials from parents, Pope gave Bashamak a negative job performance review. Bashamak had asked that his review be conducted by someone else since he viewed the principal as biased, but the district ignored that request. Then Pope issued a letter of reprimand that claimed Bashamak failed to notify him or the office manager before leaving the campus during the work day seven weeks earlier.

Bashamak denies the claim, calling it more punishment for speaking up. Last July, Bashamak filed an unfair practice allegation against Twin Rivers with the Public Employment Relations Board, claiming that he has repeatedly been the victim of retaliation from Pope and district officials.

In the meantime, the teacher says his experience with the district has been extremely disappointing, especially when he thinks back to growing up in Ethiopia, when he always heard that fairness and justice were America’s highest ideals.

“It’s been very stressful,” Bashamak said. “And, actually, it’s made me question if I’m really an American. I felt like I’m back in the old places I came from, because there’s no rules, there’s no due process, and people can just mess with you with impunity.”