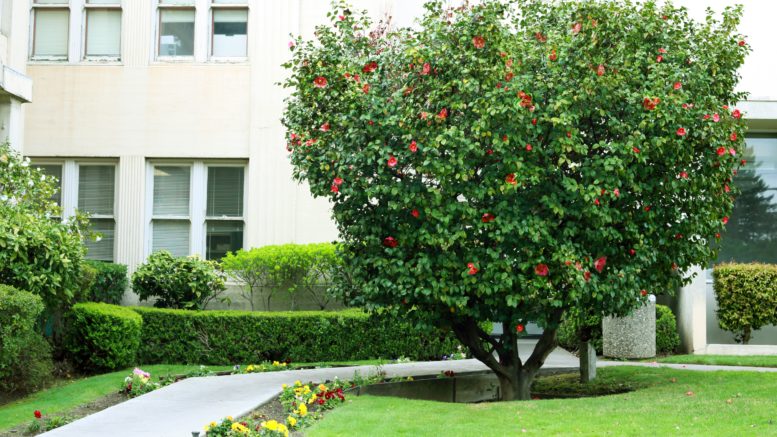 This successful double transplant represents a Camellia City milestone. Back safely in the ground, the oldest camellia in Sacramento is once again in bloom.

Its original plaque notes the bush’s first transplanting in front of what was then Sutter Maternity Hospital on F Street near 51st. The bush was a gift from Dr. A.R. Boscoe and had been moved from K and 28th streets, the site of the original Sutter Hospital. Considering the bush was probably at least 10 years old before its first move, the Sutter Memorial camellia may be well into its 90s.

During its stint outside Sutter Memorial, the beloved camellia grew to tree size, reaching more than 10 feet tall. Each February and March, its dark pink flowers welcomed thousands of new mothers—and many heart patients, as well.

Nicknamed “Sacramento’s Baby Hospital,” Sutter was the birthplace of nearly 350,000 babies—generations of Sacramentans and enough people to fill several suburbs. (The hospital became Sutter Memorial as it expanded its services.)

“The camellia bloomed every late winter to the delight of staff, new mothers and visitors, signaling the new life that Sutter Memorial was known for,” said hospital spokesman Gary Zavoral. “In addition, Sutter Memorial was where many of the region’s first heart surgeries were performed, including the first heart transplant in Sacramento.”

But when Sutter Memorial planned to move into its new Midtown facilities in 2015, redevelopment put the Sutter camellia at risk. It had to be moved out of the way as the hospital’s buildings were demolished and the new Sutter Park neighborhood went up.

A group of Sutter nurses worked with the Camellia Society of Sacramento and developer Stonebridge Properties to save the humongous and venerable plant. An unknown variety suspected to be one of a kind, the Sutter camellia was almost as wide as it was tall with roots to match.

Moving such an old and big camellia—then keeping it alive and replanting it—was an extremely difficult operation. BrightView Landscape Services dug up the camellia in 2017 and maintained it for more than a year until its replanting in December 2018, supervised by Randy Sater of Stonebridge.

Camellia expert Bob Peralta of BrightView checked on the plant regularly. Showing its hardiness, the camellia not only survived, but thrived once it was re-rooted in its East Sacramento home—at the entrance of the new Sutter Park neighborhood.

The March 5 dedication coincided with the camellia’s current bloom and installation of a new plaque that details the bush’s history.

Sutter Medical Center staff past and present were on hand to greet their old friend, which now has a new name: “Sutter Memorial Memories.” The local Camellia Society plans to register the flower name with the American Camellia Society.

“I’m amazed at how big it is and how healthy,” Zavoral said. “It might be the biggest as well as oldest camellia in the Camellia City.”

Essay: Rising from the ashes

Be the first to comment on "A successful transplant"