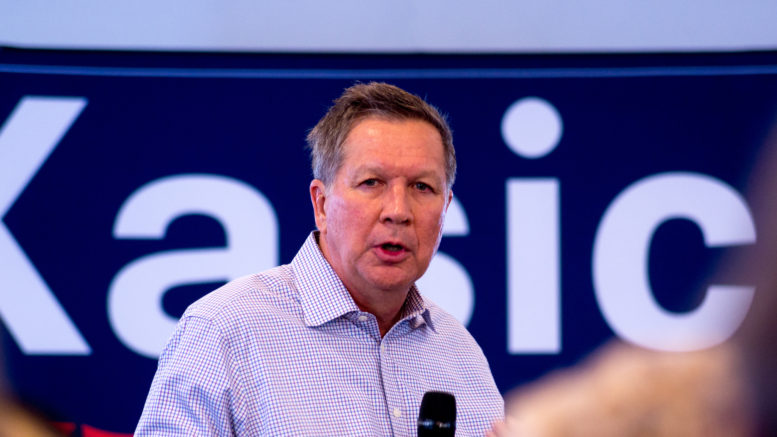 Gov. John Kasich of Ohio campaigns for president in New Hampshire in 2016. What if a Democratic nominee picked him as V.P.? (Photo from Wiki Commons)

Should the Democratic nominee pick a Republican running mate?

Do you want to be up until the wee hours of Nov. 3 waiting for our nation’s fate to be decided by a few thousand voters in Michigan, Pennsylvania and Wisconsin—just like in 2016?

Winning this election—and saving America from four more years of President Donald Trump’s madness—is all that matters. So Democrats must not only unite, but make a bold move to shake up the Electoral College math. A GOP vice presidential nominee could bring over moderate Republicans and independents who are so crucial to winning the key battleground states, or maybe even win back some of those who voted for Barack Obama but then for Trump.

Yes, there’s an argument that the real path to victory for Democrats is to rev up the party’s base and attract new young and diverse voters—the way that Obama did in 2008, but Hillary Clinton failed to do in 2016.

But lots of those potential voters live in states—including California—that the Democratic nominee is going to win no matter what.

Four years ago, Clinton won nearly 2.9 million more votes nationwide than Trump. But she lost Michigan, Pennsylvania and Wisconsin by fewer than 80,000 votes combined—and lost the Electoral College 304 to 227.

According to one analysis, Trump could lose the popular vote this year by 5 million and still stay in office. He could lose Michigan and Pennsylvania and win if he carries every other state he did in 2016.

And it’s not just about the Democratic nominee eking out a narrow win in November. The scary truth is that he or she needs a sweeping, undeniable victory in the Electoral College, as well as the popular vote, to force Trump and his diehard MAGA followers to accept defeat without protests—or something worse. And to try to break the D.C. gridlock and get things done, Democrats need to keep control of the House and flip the Senate.

Yet it will take political courage for the Democratic nominee to even entertain the possibility of a Republican as V.P. The blowback was immediate and fierce when former Vice President Joe Biden told a New Hampshire voter on Dec. 30 he would consider the idea, though he couldn’t think of anyone off the top of his head.

How about a moderate such as Gov. John Kasich of Ohio, the ultimate battleground state? It has 18 of the 270 electoral votes needed to win the presidency, and it has voted for the winner in every election but one since 1944.

It’s still far more likely, however, that the Democratic nominee will try to balance the ticket by ethnicity, gender and geography—the traditional approach. For instance, Biden has suggested he’s looking at a woman or African American, and has mentioned Sen. Kamala Harris of California, who announced March 8 that she’s endorsing the former vice president.

But if there’s any lesson from the last four years, it’s that the usual political strategies don’t always work anymore. And Trump may be stronger and even more ruthless after craven and cowardly Republicans acquitted him in the Senate impeachment trial. He has proven he will do anything—lie, cheat, steal, accept Russia’s help—to win.

Trump and his administration full of incompetents and ideologues have already done so much damage. How much more could they do in four more years?

If the choice is between the clear and present danger of four more years of Trump, or the hypothetical risk of a Republican succeeding a Democratic president, it’s not even close.

Essay: Not backing down

Essay: The case for reparations