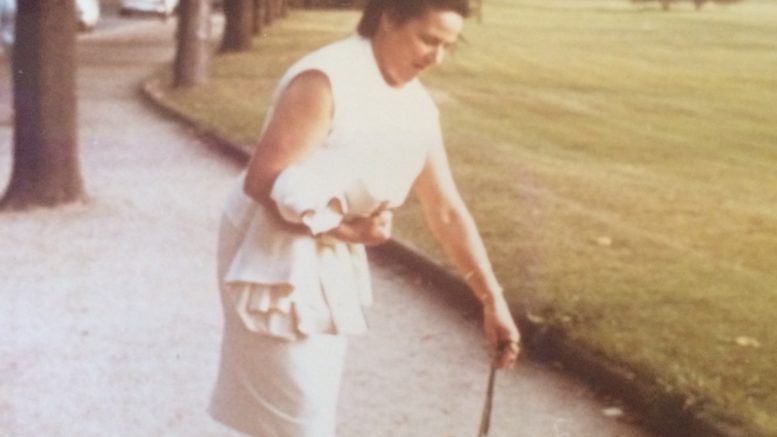 As the story goes, I thought my grandmother was a witch the first time I almost met her.

It was 1984. My family had come a long way to the West German city where my “Oma” lived. But for whatever reason, she refused to open the door when my mom arrived with her husband and two young sons, neither of whom Ruth (Battesch) Fingerhut had met. As the unanswered rings and knocks made clear to our baffled unit, it wasn’t going to happen that night. That’s when 4-year-old me asked if the old woman in the window was a witch.

Kids. We think the world is born with us. But it’s so much older and harder than we can fathom. And the rare ones like my grandmother—survivors of a violent, belligerent age—they’re just looking for a safe place to unbury their hearts.

My Oma looked in the classifieds.

Born 1913 in Strasbourg, Alsace-Lorraine, a territory that shifted back and forth between French and German control, my grandmother grew up speaking French, which feels fitting for this story.

Ruth’s early years were privileged ones. Her grandparents were landowners and her father was an officer for Kaiser Wilhelm II, Germany’s last emperor. My great-grandfather remained loyal to the Kaiser even when the Third Reich rose to power, and was executed for taking part in a botched assassination attempt against Adolf Hitler.

Pretty cool, right? Not for Ruth. She had already lost her mother at an early age. Things didn’t exactly improve once my teenage grandmother became an orphan.

Her bourgeois Franco-German grandparents were slaughtered by Russian soldiers, then lost their land to postwar reconstruction; her schoolteacher husband was drafted by Hitler’s army and returned broken; and Oma’s instinct for survival, her secret strength and resourcefulness, had conspired to make her a difficult woman to be around for very long.

Life can be cruel that way. It shapes you with its hardships and leaves you bent and inadequate for what comes next.

Oma remarried once after my grandfather died in 1962, to a former Nazi major so haunted by the atrocities his men committed while stationed on the Russian front that he was prone to drunk, tearful confessions. Their 15-year marriage, until Walter died in 1979, was described to me as a pragmatic union. My aunt Ellen Sutterfield (who everyone in my family calls “Engele,” for “angel”) says Walter had a good job in the chancellor’s office, providing Ruth with the stability she had missed since childhood.

After his death, my twice-widowed grandmother became a prolific presence in the personal ads section of the newspaper, which was like the 20th century version of Tinder if Tinder left ink smudges when you swiped.

These stories from thousands of miles away tickled my mom, who relayed them in unsparing detail to her teenage sons, who weren’t as enthused about their sexually active Oma. Engele says she entertained most of her first dates at home over coffee and cake (which frankly sounds alarming in a state that BackgroundChecks.org rated third most dangerous for online dating). And if Oma fancied them, well, she moved fast.

In her 80s, after losing another partner to old age, she swooned over a wealthy man named Fritz, who had his own winery. “She saw all the richness, so she came home and packed up her silver and dishes to show she had something too and just left,” my aunt laughs.

Fritz and Ruth remained an item for about four years, until she tired of him. There was another relationship after that, but short-lived. The reason? He had a dog. Sometimes that was all it took.

“She always thought the grass was greener and it wasn’t,” Engele says.

By this point Oma was in her 90s. She had one more crush that I remember hearing about, on a male nurse at her assisted living facility. But it was just a crush, Engele says. “You know the competition in a home.”

I always liked these stories about my grandmother. The thought of her getting crushes, leaping into relationships and, yes, still getting busy at 80, made her less intimidating. She was just like the rest of us—searching for love, stumbling and trying again.

Then Engele has to burst my bubble: 90% of these relationships revolved around financial security, she says.

Except, there was that one time long ago. There was this handsome boy from a wealthy family (“of course,” Engele says), when Ruth was around 15. Their brief romance lived in my grandmother’s imagination long after he broke her heart and she fantasized about throwing herself in the lake.

“When we were children, she always talked about him,” Engele says. “His name was Hans. I never forget that name.”

That isn’t to say my grandmother died alone. When she finally passed in 2009, at the improbable age of 96, she went to her final sleep in the arms of my uncle Fritz. There are just some romances that stick.