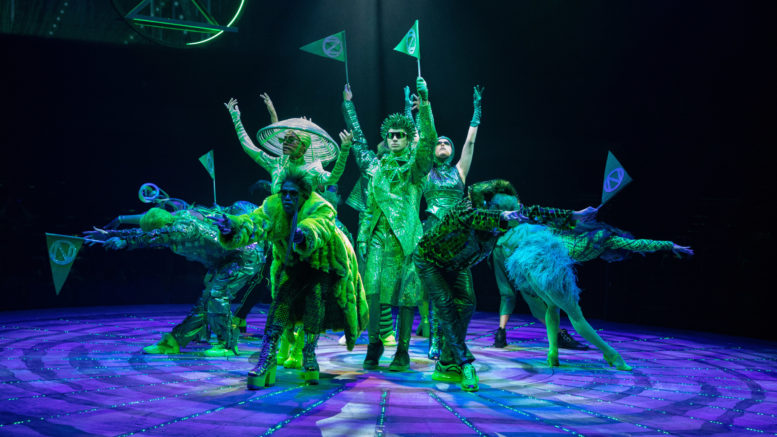 Broadway Sacramento and Dignity Health declared last month that a five-year naming rights deal was the beginning of a beautiful partnership that would grow the arts and improve the community’s health.

It took only 11 days to annul the marriage.

In that short time, transgender activists spoke out and organized a threatened boycott over the health system’s treatment of LGBTQ patients. The curtain has closed on this drama, and the reviews are in: It’s another indication of the growing power of Sacramento’s LGBTQ community.

Ebony Harper, a transgender activist who helped lead the protest, certainly hopes so.

“Historically, we haven’t been as influential,” Harper said. “But we’re living in different times. We’re in constant fight mode so we can organize quickly.”

And Sacramento is more supportive of LGBTQ rights than some may believe. In fact, last week the Human Rights Campaign gave Sacramento a 100 score on its annual report card of inclusion in law, policy and services. It was one of 88 U.S. cities and 14 in California to get 100. To cap off Trans Awareness Week, transgender pride flags flew over the state Capitol for the first time and over City Hall on Nov. 20.

“When the transgender community speaks, a lot of the community will listen,” said Harper, who recently started the National Alliance for Trans Liberation and Advancement. “It was clear that there was an injustice here.”

Initially, the bar’s management said it didn’t realize the shows were booked during Sacramento Pride week in June. Later, the bar said it had listened to the community and apologized for “the angst that booking these shows has caused many members of the community.”

David Heitstuman, executive director of the Sacramento LGBT Community Center, which produces the SacPride march and festival, said while he sees some progress, there’s still a huge gap between equality in the law books and the actual experiences of people at school, at work and at businesses.

“All of our institutions should be open and affirming of all LGBTQ community members,” he said. “There’s a long way to go.”

Making that change in society happen is going to take continued education and activism, he said. The arts are providing another forum to raise public awareness about discrimination in the workplace, hate crimes and even deadly violence against the LGBTQ community, including a string of killings of black trans women, even as the Trump administration rolls back protections.

Steve Hansen, Sacramento’s first openly gay city councilperson and a self-described arts lover, says it should have been obvious that Dignity Health was not a good fit with Broadway Sacramento, especially given that musical theater and the LGBTQ community have such a long, storied history together and so many community members are directly involved in theater.

“There’s nothing more quintessentially queer than Broadway musicals,” he said.

Hansen isn’t alone in believing that the entire predicament could have been avoided with a little more due diligence by Broadway Sac. “They failed to ask the right questions,” he said.

The drama started on Oct. 28 with the press release from Broadway Sacramento that Wells Fargo Pavilion, home to its summer Music Circus performances, would henceforth be known as Dignity Health Theatre.

Wells Fargo paid $1.5 million for the naming rights over 10 years, but told Broadway Sac in June it would not renew the contract. The bank has had its name on the downtown theater since 2003, but has had some image problems of its own due to scandals since 2016 over home mortgage abuses, fake accounts and other wrongdoing that led to hundreds of millions of dollars in fines and lawsuit settlements.

Dignity Health, however, is well known in the LGBTQ community for not performing gender reassignment procedures. And in February, San Francisco-based Dignity completed a merger with Colorado-based Catholic Health Initiatives, forming a $29 billion company that is the nation’s largest nonprofit hospital network but also more complications over whether Dignity’s seven non-Catholic hospitals in California will continue to perform services that violate church doctrine.

Dignity is being sued by the American Civil Liberties Union on behalf of Evan Minton, a Sacramento-area transgender man who was denied a hysterectomy at Mercy San Juan Medical Center in Carmichael in 2016. The health system says its Catholic hospitals “do not perform sterilizing procedures such as hysterectomies for any patient regardless of their gender identity, unless there is a serious threat to the life or health of the patient.”

Harper is good friends with Minton, and got tagged in a Facebook post about the naming rights deal. “I was enraged,” said Harper, who promptly started organizing on Facebook to support Minton and to oppose the “ungodly deal.”

Not only did transgender Sacramentans respond, so did the entire LGBTQ community and its allies and Music Circus patrons, and the threatened boycott spread. Dignity Health and Broadway Sac backed out of the agreement even before a protest in front of the theater happened.

In their Nov. 8 joint statement, Laurie Harting, Dignity’s Sacramento region president, said the health system saw the partnership as “a great way to promote the intersection of health and the arts,” but didn’t want it to become a distraction so would find another way to support Broadway Sac.

Harting also said Dignity officials were “surprised and disappointed by some of the concerns that were raised,” given its “legacy of providing care to people of all backgrounds, sexual orientations, and gender identities,” including being among the first to offer services during the 1980s AIDS crisis.

Lewis said in the statement that Dignity Health is “a longtime pillar of this community,” but that concerns about the partnership had unfortunately “begun to distract” from elevating the arts.

“Broadway Sacramento and Dignity Health have agreed that the best approach is to find a new sponsor for our theater,” he added.

That may take a while.

Hansen and Mayor Darrell Steinberg met with Broadway Sacramento officials on Nov. 19 to figure out who that naming rights sponsor might be. Broadway Sac has not disclosed how much it would have received from the Dignity deal.

But the money is important. It still owes $8.7 million in principal and interest on the theater. If it defaults—it hasn’t missed a payment yet—the city would be on the hook.

Heitstuman said he’s glad that Broadway Sac “did the right thing,” regardless of the cost.

Hansen said he was inspired that in opposing the naming rights deal, activists made clear they didn’t want to harm Broadway Sacramento or local arts.

“We didn’t like the partner, but we love the theater,” Harper said. “We claim that as our theater. We want to protect that space.”

An unpredictable call. A heavily armed suspect. An ambush that leaves police searching after the death of Officer Tara O’Sullivan.

Essay: Sacramento is no Portland