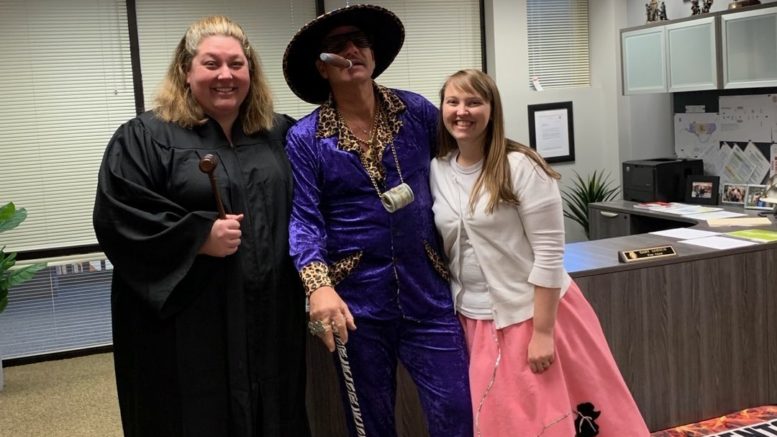 Sacramento Fire Department Chief Gary Loesch mugs it up as a pimp with his employees during an office Halloween party.

In the grand scheme of firefighter controversies, maybe this one isn’t so bad.

Photos obtained by SN&R show Sacramento Fire Chief Gary Loesch celebrated his second Halloween office party by dressing up in full pimp regalia—purple satin jumpsuit with cheetah-print trim, wide-brimmed hat, swizzle-stick cane and a roll of $100 bills lolling from a chain around his neck. Subtle it was not. But in good taste?

The chief no longer thinks so.

“In hindsight, I realize my costume was a poor choice,” Loesch said in an exclusive statement to SN&R. “I apologize; it was never my intention to upset any members of the staff or the public.”

While it’s unclear how the public feels, at least one person took issue. City Manager Howard Chan confirmed that a complaint lodged through the city’s whistleblower hotline has triggered a human resources review.

“As soon as I was made aware of this complaint, I immediately spoke with Chief Loesch about his costume,” Chan said in a statement. “I was frustrated to learn of this incident. The costume was both insensitive and an error in judgment.”

The timing isn’t great. The city is currently in contract negotiations with the firefighters union. Then there’s the historical context to consider:

All that isn’t to be confused with the Sacramento Metropolitan Fire District’s massive sex scandal in 2007, which spawned its own dismissals and a whistleblower lawsuit alleging cover-ups at the highest level.

SFD has been enjoying a stretch of goodwill and internal stability lately, thanks to its assistance in major wildfires around the state—including 12 days on the Kincade Fire—and the appointment of Loesch, sworn in last October after a seven-month search that plucked the veteran from Philadelphia. (That city’s Fire Department was dragged through its own widespread sex scandal in 2015.)

That’s the backdrop for the pimp cosplay photos, which depict the chief posing with an administrative staff including 10 women and one man. In one photo, Loesch mugs it up in front of his office desk, between a woman dressed as a judge and one in a 1950s sock hop outfit.

SFD spokesman Capt. Keith Wade initially said he couldn’t comment on the incident without first seeing the photo, writing in an email that he didn’t “have any information in regards to our Chief dressing as you put it, ‘a pimp.’”

This isn’t the first time public officials’ Halloween choices caused a flap. In 2017, leaked images of employees at the Sacramento-based Judicial Council of California dressed in face-painted prison drag prompted criticism from the NAACP and other groups.

According to the city’s Office of Public Safety and Accountability, SFD was the subject of 86 civilian complaints last year, 30-plus more than each of the previous two years. Most complaints concerned discourteous behavior. Of the 55 completed misconduct investigations, 44% resulted in disciplinary action. Eight remained open at the time of the OPSA report.

Be the first to comment on "To pimp a fire chief"