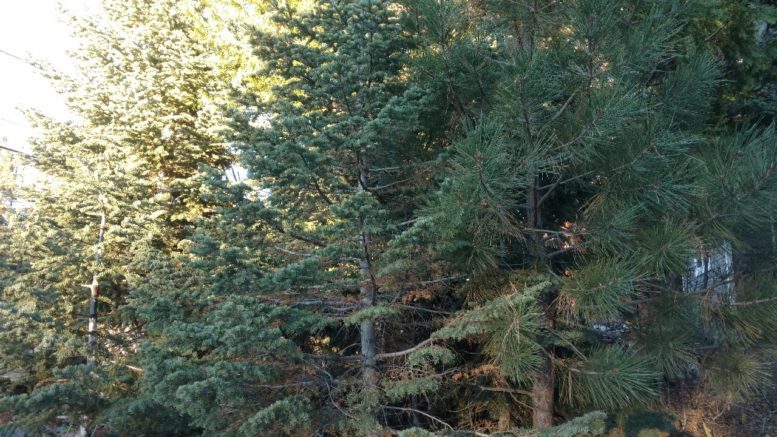 Trees crowded together in suburban yards can fuel wildfires. (Photo by Debbie Arrington)

Suburban residents need to be ready for wildfires, too

My trees are touching and it’s making me nervous.

The more I learn about wildfires—how they spread and the danger they represent—the more I view my suburban surroundings with an eye out for fire safety. My lush landscape could be a potential fire trap.

Overcrowding shrubs and trees can increase the speed and intensity of a blaze. That’s true if those plants are growing in the wild or your own backyard.

Recent infernos have shown that wildfires can happen anywhere in California. All it takes are dry and windy conditions—and a spark.

The past two weeks, reminders have been constant. Grassy fields along Interstate 5 in Natomas were torched. Flames ignited on either side of the Carquinez Bridge that carries Interstate 80 to the Bay Area. Subdivisions in both Northern and Southern California were threatened by wildfires whipped by devil winds. Thousands had to flee their homes in Sonoma County.

Late October and November used to be considered relatively safe from wildfires. Now, fire season extends year round. Any Californian should be ready anywhere any time.

That’s the message behind ReadyforWildfire.org, a very useful website created by Cal Fire. Firefighters and communities need homeowners to pitch in and help make their neighborhoods less prone to burn. That includes not creating highly flammable hazards.

“Big picture, there’s a multitude of different things that are part of this circle,” explained Deputy Chief Scott McLean, Cal Fire’s chief of information. “Homeowners are aware of the need for defensible space, but things are changing.”

Defensible space around a home is suggested at least 100 feet in foothill and mountain communities. Keeping plants green and well irrigated helps. But even green grass will burn in a wildfire.

Spacing is key, McLean said. The first five feet around any structure should be non-combustible. “There should be nothing including plants,” he said.

Gravel, paving or decomposed granite is OK. Vines on the walls and foundation shrubs? Take them out. No limbs should hang over the roof or touch the chimney. Trees should be at least 10 feet from the house.

Cal Fire recommends removing limbs on the lower six feet of mature trees. But if shrubs grow under that tree, trim the limbs even higher. “You don’t want to create a ladder where the fire can climb into the crowns of the trees,” McLean said. “That’s how fires spread.”

Fire has a tougher time spreading when trees and shrubs are farther apart. For example, the recommended spacing for shrubs should be as wide as the plant. That makes hedges and privacy screens problematic.

Creating defensible space is vital for homeowners who live in or near the wildland-urban interface, those semi-rural areas where the forest or grasslands and neighborhoods meet.

“Just think of the fire break we could create if everybody in a community did this,” McLean said. “Take responsibility; 95% of wildland fires are 10 acres or less. So we know defensible space works.”