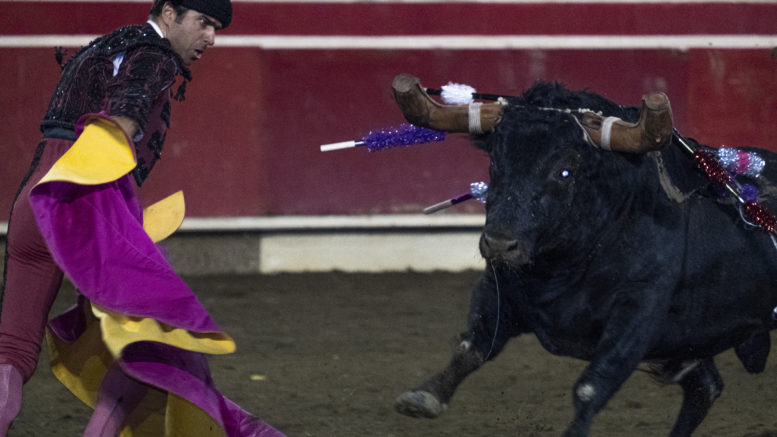 Matadors traveled all the way from Portugal to perform at the bloodless bullfights in Thornton Oct. 21. The spears that cling to the bull are magnetic. Photo by Karlos Rene Ayala.

Pain and perseverance at the bloodless Portuguese bullfights of the Delta

With dying sunlight shifting through the town of Thornton, Donald Alcino Mota lays back on a stage inside its empty Portuguese Hall and prepares to grab his bahetta – the festive hat of an Old World bull-baiter.

On the other side of a parking lot, a boxed-in steel trailer is parked at a corral teaming with long-horned steer. The trailer’s shaking violently on its axels. Every thunderous crash against its siding – every ominously shift of weight tipping its sideboards towards the earth – is a signal from the restless bulls inside. They’re hell-bent on running.

Mota, who grew up in Central California, has spent more than a decade on a team of forcados, the unpaid volunteers who perform the Pega de Cara, or “face catch,” of the toro. It’s the ceremonial end to a Portuguese bullfight. Few know it, but for nearly 50 years the farming hamlet of Thornton has held bloodless bull combat as part of a broader tradition celebrating Portuguese roots in the Delta. It’s an atmosphere that scarcely feels like the West Coast, as matadors in gem-studded vests, and ornate horse-mounted bull-chasers called cavaleiros, travel from Lisbon to perform in this quiet corner of San Joaquin.

It’s a much tamer game these culture-bearers from Portugal play during their California exhibitions, as no real weapons are used against the bulls. There’s still some risk to the professionals, but there’s no direct harm to the 1,700-pound beasts they’re ducking and riding around. No, the real risk is assumed, embraced and obsessed over by the Portuguese-American men from the surrounding communities. The forcados. Men like Mota. Working in teams of eight, the forcados provoke the bull at the end of each fight, tackling it and together holding it in place until it’s still. Thirty years ago, a reporter from Fresno who was watching this chaos of costumes, hooves and dust coined it the Golden State’s version “a suicide squad.”

The forcadoes embrace that mantle, too.

Mota grew up watching forcados. After his stint in the U.S. Army was over, he got hooked on the teams.

“Everyone thinks that grabbing the bull would be the big thrill,” Mota says, “but it’s really similar to the military, in that it’s knowing there’s people who you’re with, and you’re willing to sacrifice your body for them, and they’re will to do that for you.”

In two hours, Mota will learn just how prophetic his words really are.

Portuguese immigrants began farming on the Delta’s islands five generations ago. Thornton may be a backwater of 1,100 people, but it’s Portuguese Church is the epicenter of a long immigrant legacy in northern California – and its bullfighting stadium is the largest structure in any direction.

Tonight’s contest between man and beast marks the end of a four-day festival praising Our Lady of Fatima, which includes candlelight processions, float-laden parades, communal feasts and performances of Portuguese singing and rhyming traditions. Al Magina, one of the organizers, says the weekend is about making sure the Portuguese of California keep a sense of their identity. He adds that a migrant farming background, combined with a shared Catholic faith, has created a special bond between the area’s Portuguese halls and its Mexican-and Filipino-American churches. The members of the latter are now die-hard participants in this festival.

“Even though they don’t know our culture, they’re very devoted to our Lady of Fatima, and so they come and gather with us,” Magina explains. “And I guess we’ve become one whole family.”

Soon, the royal call of Iberian trumpets goes blasting through the bull stadium. The matadors and cavaleiros who’ve traveled from Europe make a grand entrance to a panorama of cheers.

Looking on from trenches, Mota waits for his team, the Forcaods Luso-Americanos, to perform the Pega de Cara. They’re slated for the third bullfight of the evening. Mota and everyone else can see that the massive, jet-black bulls hauled up to Thornton tonight pack a punch. It’s clear from the first animal, a sleek, stalking engine of pure aggravation. At one point, this bull moves so fast that it’s able catch one of the cavaleiros’ horses at the hindquarters. It knocks both stallion and rider down into the grit. Screams explode overhead as focados rush at the pluming cloud from every direction. They join two unflinching matadors, stopping the bull from goring the horse by overwhelming it with new targets.

Things don’t get better when the first forcado team tries to tackle this hoofed heavyweight. The lead man approaches with bold, deliberate struts, taunting the animal with his hands on his hips. The bull zeros in, ducks its head, and then launches across the arena floor. Horns go ramming into the forcado’s legs, the muscle-stump of the aggressor’s neck launching his victim into the air like a rag doll sailing on the Delta breeze. In an instant, the bull crashes through the other forcados, scattering them into a battered blur of overturned bodies.

Within an hour, it is time for Mota and his teammates to make their play. The bull they’re up against looks even meaner than the first one. It keeps digging its hooves into the dirt before bolting with wild desperation at the matadors. Three times this bull lunges so hard that it smashes into the wood siding of the trenches. The forcados are supposed to wait until it’s tired. But it never seems to get tired. So, finally, they face him down.

With the entire stadium watching, their leader, Raymond Oliveira – Mota’s brother-in-law – practically dares the bull to trample him.

It’s eager to oblige. It moves like a primordial cannon blast – a swift, unstoppable blur of violence descending fast on the group of men. The bull’s forehead hammers Oliveira’s midsection just as he catches its face. The animal tries to launch him, but Oliveira hangs on. He’s tossed and turned and skull-butted – yet he’s able to keep clinging to its neck. His strength is unshakable. Mota and the others form a human cuff on the bull. They have him pinned; but, suddenly, something’s very, very wrong.

Bracing themselves against the bull’s spine, they begin emphatically calling for a medic. From where he’s wrestling, Mota can see that Oliveira’s hurt. In fact, two bones in Oliveira’s leg are shattered and his foot below is broken in four places. The forcados struggle to keep the bull subdued as firefighters run into the stadium. They carefully pull Oliveira from the tense tangle of bull and bodies. He’s loaded onto to a stretcher.

Once the medical workers are clear, the team releases the bull. But the creature isn’t done. It starts charging the other forcados. It’s intent on running them down. But it can’t. It suddenly realizes that Mota has both hands holding its tail. The animal becomes an blazing tornado fast turns and flexing tendons –a stomping head of steam that’s trying to kill the man at its rear. It rages in revolutions. Mota keeps his grip as he’s spun in ever-faster circles. A dust storm is lashing up from his heels that are half-skiing on the ruptured clods of the arena. Mota spins again and again. A fourth time. A fifth time. A sixth time.

When last forcado jumps into the trenches, Mota releases his hands and goes skidding out to a stop under the stadium lights. The bull turns to face him. Mota’s thick, dark hair whip a little as he nods at it. The audience erupts with cheers. The bull slowly pivots, trotting away.

Mota is soon standing over the stretcher at his brother-in-law’s side.

“It’s breaking my heart to see him in pain,” he admits. Then, asked about his feat just minutes before, Mota gives a shy nod, muttering, “That was just doing my job.”

Be the first to comment on "Bull by the tail"