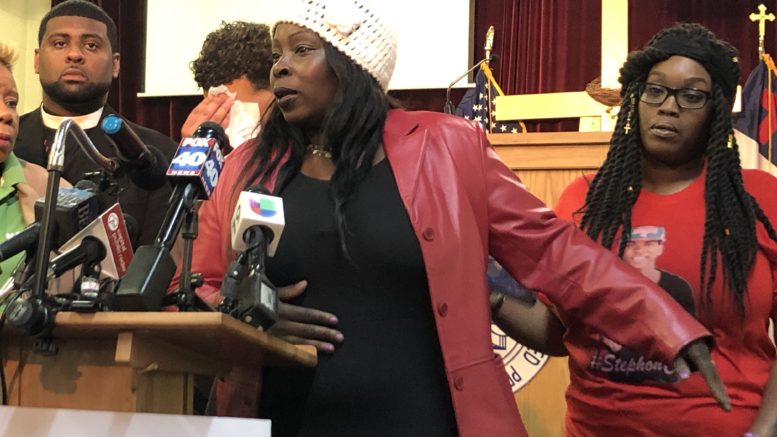 In a wound-opening development for the family of Stephon Clark, the two Sacramento police officers who shot and killed the unarmed 22-year-old black father more than a year ago are returning to active duty.

The announcement was made only moments after a more predictable one last week: The Trump administration’s Justice Department concluded that Clark’s civil rights weren’t violated in March 2018, when Officers Terrence Mercadel and Jared Robinet rounded a blind corner in pursuit of a window-breaker and fired 20 rounds without announcing themselves. At least seven of those rounds struck Clark, who was standing in his grandparents’ Meadowview backyard holding only a cellphone.

Clark’s death launched sustained protests and enough momentum for California legislators to pass one of the strictest police reforms in the country—Assembly Bill 392, which permits deadly force only when officers or the public are objectively threatened.

Throughout it all, Clark’s family said they wanted one thing above all else—accountability for the officers who stole Clark’s life. Last week’s conclusion of the federal review by the U.S. Attorney’s Office and FBI means they won’t get it.

Stevante Clark was the first to break that news on his Facebook page during a meeting with federal officials on Sept. 26. “No charges will be filed[.] [T]he officers who killed my brother will remain on the Sacramento Police Department,” he posted around 2:45 p.m. Later that night, Clark shared a mockup of a wanted poster with images of the officers beneath the message, “I want you all 2 never forget the fact we have two killers roaming the streets freely.”

Reactions flooded in from around the region. Black Lives Matter Sacramento, Sacramento for Black Lives, the ACLU of Northern California and the Sacramento chapter of the National Lawyers Guild all urged against reinstating the officers.

“We are disappointed that the officers involved in this horrendous episode will be allowed to resume their jobs as if nothing happened,” family attorney Benjamin Crump said in a statement. “Stephon Clark was in a place he was allowed to be, doing things he was allowed to do, yet these officers murdered him for no reason. The decisions not to pursue criminal charges against these officers will not deter us from fighting for justice in civil court for Stephon’s family.”

The announcement came 21 days after the city agreed to pay Clark’s two sons $2.4 million as part of a structured settlement. A federal lawsuit involving Clark’s mother, grandmother and uncle is ongoing.

City leaders cautiously tried to turn the page on the Clark saga, with police Chief Daniel Hahn and City Manager Howard Chan releasing separate statements that focused on changes the Police Department has made since the shooting, including ordering officers not to deactivate or mute their body-worn cameras and to consider the broader public safety implications of engaging in foot pursuits like the one that ended with the death of an unarmed man.

“My heart goes out … to the entire Clark family,” Hahn said in his statement. “The tragedy that took place after a 911 call to our communications center will always have a profound effect on our Department and Community as a whole. We are forever dedicated to finding reasonable alternatives that may prevent similar tragedies.”

In a press release, McGregor W. Scott, U.S. attorney for the Eastern District of California, and Sean Ragan, special agent in charge of the FBI’s Sacramento division, said their review of the incident was unable to “prove beyond a reasonable doubt that any officer’s actions violated federal criminal civil rights statutes.”

But like earlier reviews by the Sacramento County District Attorney’s Office and California Attorney General’s Office, which cleared officers of criminal charges, federal authorities didn’t conduct their own investigation. Instead, they based their determinations on the investigation of the Sacramento Police Department, which employs Mercadel and Robinet.

That fruit-of-the-friendly-tree approach could drive the next police reform test in the state Capitol.

Democratic Assemblyman Kevin McCarty of Sacramento previously told SN&R that he is interested in reviving legislation to require California’s attorney general to investigate such deadly force cases, taking the investigations out of the hands of elected districts attorney who work closely with law enforcement. A review of such models in other states, however, found little difference in the outcome.

Vernadine Murphy Mann, the sister of Joseph Mann, another police shooting case that forced changes within the Sacramento Police Department, previously told SN&R that she doesn’t trust any law enforcement entity to conduct an unbiased investigation, and suggested giving that responsibility to a highly trained civilian investigator, an idea the police unions would certainly oppose.

“I think those components have to be talked about now, and we haven’t been talking enough about it,” Accius said.

While Clark’s body was blood-tested following his death, the officers who killed him were not.

Be the first to comment on "No justice, no surprise"