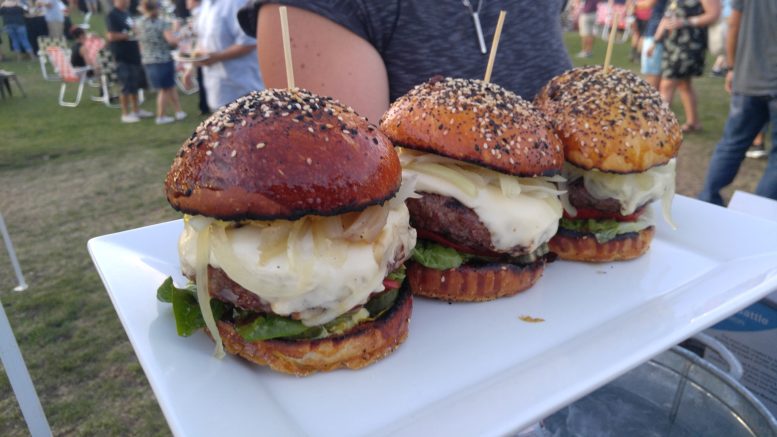 This stacked burger won the judge's choice award at the eighth annual Sacramento Burger Battle. Find out which restaurant it belongs to. (Photo courtesy of Rick Mindermann)

The savory aroma of grilled beef and puffs of white smoke from massive barbecue rigs took over Drake’s Barn in West Sacramento last Thursday. It was an all-out battle between 15 restaurants, all competing to see who would be crowned this year’s winner at the eighth annual Sacramento Burger Battle.

The battle’s founder, Rodney Blackwell, is a dedicated burger connoisseur and runs the Instagram account @burgerjunkies with nearly 50,000 followers. Each year, Blackwell partners with the Crohn’s & Colitis Foundation to help raise money toward a cure. This year, the battle raised more than $100,000, which Blackwell said was the highest grossing fundraiser ever for the charity.

Besides his love of burgers, Blackwell started this cook-off for more personal reasons. His oldest daughter was diagnosed with Crohn’s disease when she was just 5 years old and this is his way to help raise awareness and funds. It’s also a way to showcase Sacramento’s dining scene.

Some of the area’s best restaurants flipped burgers and toasted buns for a sea of hungry attendees and a panel of judges, which included: Rick Mindermann, store director of Corti Brothers; Mark Tarbell, an Iron Chef America winner (He beat Cat Cora!) and restaurant owner in Phoenix; Eric Veldman Miller, owner of V. Miller Meats in East Sac; Greg Berger, a graphic designer and author of Burgers & Buns: Handcrafted Burgers from Top to Bottom; Joey Garcia, advice columnist for SN&R and me, SN&R’s dining editor and lifelong fan of food between buns.

Together, and in eight-minute increments, we sampled all 15 burgers with a short (and much needed) digestion break after burger No. 8. Some restaurants took a classic American burger approach with mustard, cheddar and shredded lettuce, while others scaled up their techniques with caraway seed buns, succulent pork belly and creative meat blends such as brisket and ribs. There were a lot of delicious spreads that popped on the palate.

“It’s just the same exact burger that we serve on the menu. That way, it’s not some extravagant burger that people will never get to have again,” said Beast + Bounty executive chef Brock MacDonald.

The people’s choice award went to first-time competitors StreetZlan, a family-owned restaurant in Galt. Its tasty King Slider—which I will be driving to Galt for—is a grass-fed beef patty, pork belly kakuni (a Japanese braising technique), togarashi mayo, sunflower micro sprouts served on a sesame seed brioche bun and skewered with a bright-green pickled pepper. I wanted to eat every bite. The nuttiness of the sunflower sprouts left a memorable impression even after the last burger of the night.

That’s what StreetZlan owners and husband-and-wife team Erick and Jessica Silva said they wanted to show attendees: Something different, yet simple.

“When you bite into it, it’s something that you won’t forget. We want you to take a bite and be like, ’Damn. I’ve never had a burger like this,’” Erick said. “You want to highlight the ingredients you’re using and just make sure those flavors dance.”

“It’s just simple and flavorful and you can actually taste the meat,” Jessica added. “Everything we worked for, everything that keeps us going, it felt so amazing to win. We’ve been wearing the belt.”

Be the first to comment on "The Burger Battle winner is …"