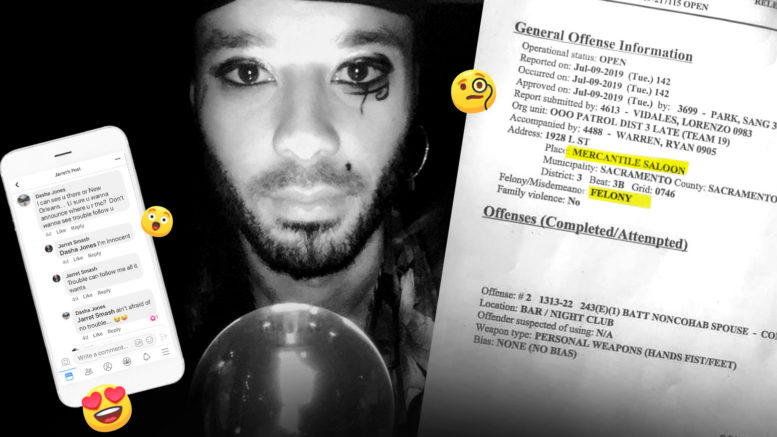 According to a publicly available Facebook account, Jarret “Smash” Pena was advertising his services as a clairvoyant in 2016. He is now the suspect in a downtown stabbing.

An online match. A parking lot stabbing. And the social networking sleuth who tracked him down.

A self-described pickup artist and psychic was apprehended in another state for allegedly stabbing a good Samaritan outside of a downtown dive bar—and it really doesn’t get more Sacramento than that.

What happened outside of the Mercantile Saloon in the early morning of July 9 is also a testament to how social media now shapes modern life—to the extent that a woman who met the suspect on a dating website then used Facebook and Instagram to try to help authorities track him down.

It’s fitting that Jamie Odam was the first to report to her Facebook friends that Jarret Pena was in custody in the state of Washington. After all, ever since last month’s stabbing, she had been on a crusade to make sure the man she met online ended up in handcuffs.

“I’ve been on this wild goose chase,” she told SN&R on July 17, eight days after police found a man with numerous stab wounds outside the Lavender District bar. “This spread like wildfire.”

But first, said Odam, it sparked with an online match.

Odam said she and Pena started dating in early April after connecting on the dating site OKCupid. She said his profile had a “bad boy party animal” vibe. But by the next month, their relationship was unraveling due to what Odam claimed was Pena’s violent temper.

“Things were kind of tapering off because of the abuse,” Odam alleged.

The night of the incident, Odam said she picked up Pena after work and the two went to the Mercantile. Odam’s grandmother had died the night before and her bank account was in the red. She said Pena agreed to buy the drinks if she drove.

At the bar, Odam said, Pena played pool while she struck up a conversation with another man. Pena eventually returned and asked Odam if she was ready to leave. She said she told him she wasn’t. She said Pena asked if she would unlock her car so he could get his belongings. She said she told him he’d have to wait until she finished her drink.

Odam said Pena grabbed her wrists, her new acquaintance came between them and Pena threw the first punch. The ensuing fight got them all kicked out of the bar, Odam said.

Odam said she didn’t see the stabbing. After she unlocked her car and Pena grabbed his stuff, she said the next thing she saw was Pena skateboarding away.

“I turned around and all of a sudden [the victim] holds his hand up and there’s blood all over his hand,” Odam said. “My world started spinning.”

According to the Sacramento Police Department, the attack happened shortly before 2 a.m. on July 9. Officers responding to a report of the earlier fight found the victim with multiple stab wounds, none of them life-threatening.

On July 12, the victim, whom SN&R isn’t identifying, posted on his Facebook page, “All I wanted to do was help. And find myself being punished for trying do right thing.”

According to a social media footprint that spans LinkedInto Couchsurfing.com, Pena sometimes had a side hustle as a guy-linered, knuckle-tatted clairvoyant. For Pena, who advertised his tarot card abilitiesunder the name “Jarret Smash” but borrowed his look from Captain Jack Sparrow, it was the latest reinvention.

Pena already tried to profit off the “pickup artist” fringe of a decade ago, offering to tutor socially awkward men to “neg” (i.e. insult) women into dating them through a Spreesy.com profile.

“Long time club kid and pickup artist. In my daily life it pains me to see all of the mistakes men make when approaching women. I am here to help,” says an Instagram account for @jarretsmashingwith 58 followers.

The Lothario sensei act didn’t go anywhere, Odam said, but Pena was still talking up his mystic abilities when they met.

“That was his pickup line for meeting people,” Odam said.

At least one Facebook user found Pena’s skills as a medium lacking.“Jarrett became extremely hostile with me when I declined to pay him 25 dollars for some bogus tarot card reading he did,” the user wrote on a thread linking Pena to the stabbing last month. “He then slandered my name all over Facebook and basically he’s a low life jerk who deserves every bit of misery he is handed.”

Local police remained mostly mum about the case; department spokesman Officer Marcus Basquez was away for training after July 29, when he said the case was still ongoing.

Odam, meanwhile, made it her mission to find Pena. She shared social media screen shots that suggested Pena might be in Oregon and then Washington state, including one exchange where a user identifying as “Jarret Smash” wrote, “I’m innocent.”

On Aug. 1, U.S. marshals detained Pena in University Place, west of Tacoma, Wash., on an outstanding attempted murder warrant from Sacramento County, according to a probable cause document from the Pierce County Prosecuting Attorney’s Office.

The warrant, issued July 22 by Sacramento Superior Court Judge Eugene Balonon, also included a charge of assault with a deadly weapon and sought a no-bail hold on Pena so he could be extradited. While Pena was arraigned Aug. 2 in Pierce County Superior Court, Prosecuting Attorney’s Office spokesman Adam Faber said Pena’s Washington case was only related to his fugitive status.

A few days later Odam got the news and shared it with her Facebook connections.

“Today marks exactly one month since the incident happened, and I couldn’t have asked for a better ’anniversary’ gift,” she wrote.

Let's all give Pepper Spray Cop a hug!