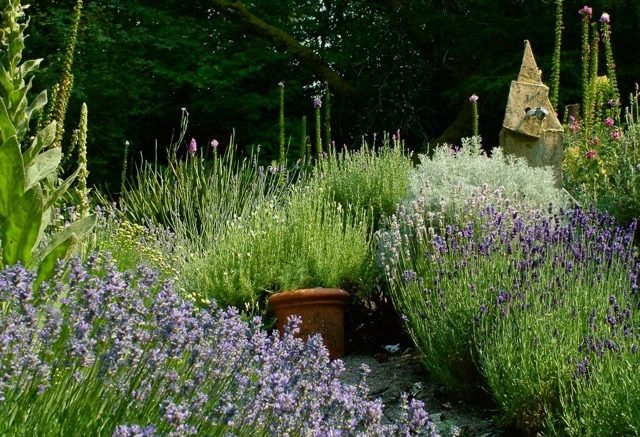 Author Robert Kourik uses a lot of lavender and other easy-care Mediterranean natives in his "lazy-ass" garden. (Photo courtesy of Robert Kourik)

When it comes to gardening, Robert Kourik sees value in being lazy.

Take a step back, sit down and relax. Think before you act, then think some more. Your garden will be better for it, he says.

One of Northern California’s most prolific garden writers, Kourik has 17 books to his credit, including four in the last decade. His latest is a distillation of his best time- and energy-saving advice: “Lazy-Ass Gardening” (Chelsea Green, 216 pages, $24.95, www.robertkourik.com).

“It’s not silly-silly; it’s got a lot of content,” Kourik said. “Everybody loves the title, at least out here in California.”

Kourik noted that “lazy” and “gardening” can seem like contradictory terms. “Gardening has a reputation” for hard work, he said.

By lazy, he means thoughtful: “Basically, think before you act.”

The most common mistakes—wrong plant, wrong place—come from lack of planning. “Fanatic gardeners don’t plan as much as they should,” he said. “They tend to just act. More planning will save them a lot of time—and work.”

Now based in Santa Rosa, Kourik is an organic gardening pioneer. In 1970s Marin County, he launched one of the nation’s first organic garden maintenance businesses. His book, “Designing and Maintaining Your Edible Landscape,” has been in print for three decades.

In recent years, he’s concentrated on low-water, easy-care organic landscaping. “I like to call it inspired laziness,” Kourik said.

Kourik wrote a whole book on lavender. “Plant lavender in November, just as the winter rain begins,” he said. “It will grow roots all winter and make for a stronger, healthier plant. When you plant in April, the roots can’t keep up. The plant needs more water, more care.”

For vegetable gardens, Kourik suggests daily drip irrigation to keep soil evenly moist. Plants are less stressed, and so is the gardener.

Though he grows a few tomato plants each summer, Kourik tends to buy his heirlooms at the farmer’s market. “They’re too much work!” he said.

His favorite “lazy” vegetable: Chayote. “I love things with multiple uses,” he said. “Chayote is my number one favorite. The new shoots taste like asparagus. You eat the fruit like squash, but the big seeds have a wonderful nutty flavor; eat those, too. The tuber is edible like a potato; you can eat a bunch and it will still grow back every year. If you’re going to grow something, why not grow a plant with three or four uses?”

His lazy maxim: Relax more and stress less. “When you don’t play in your garden, it becomes work.”

Be the first to comment on "Smart, not lazy"