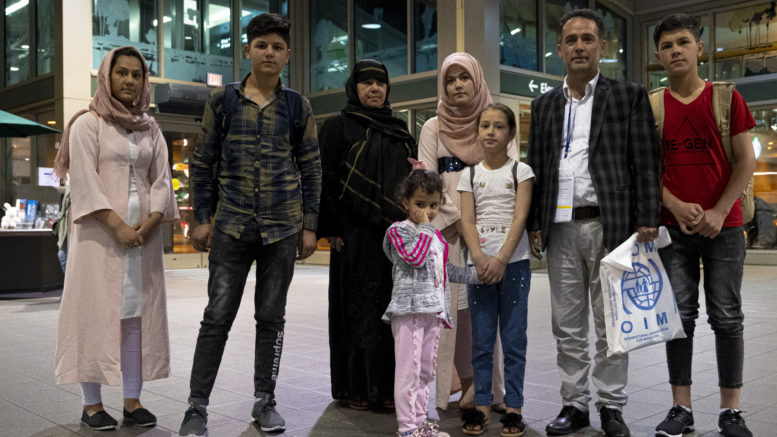 DinMohammed, second from right and wearing his Special Immigrant Visa around his neck, arrived with his wife and five children in Sacramento International Airport on May 21 after a three-year process. (Photo by Karlos Rene Ayala)

DinMohammed clasped his brother, gathered his family and did what anyone would do after spending 24 hours blurring through time zones, zombie-walking through security checkpoints and sea-hopping from Afghanistan to Dubai to California: stare blankly at the baggage claim carousel, willing it to move.

It had been a long day and an even longer decade for the Afghan husband and father, who spent nine years working for U.S. military forces in Kabul and the past three years waiting for the American government to repay him with safe passage out of his war-wearied country.

Passage finally happened on May 21, when DinMohammed, his wife and their five children landed at Sacramento International Airport following a dizzying series of red-eyes and the relay efforts of numerous bureaucrats, aid workers and local volunteers, whose mission is being chiseled by an inhospitable president.

Under President Donald Trump, the U.S. government has all but abandoned a promise to America’s most vulnerable allies—Afghan and Iraqi nationals who risked their lives aiding U.S. forces.

As recently as 2017, before the president’s crackdown on legal immigration and asylum requests begun, more than 19,000 Afghan and Iraqi interpreters, translators and U.S. government workers and their dependents were granted what are called special immigrant visas, or SIVs.

But SIV admissions plunged by more than 9,000 last year and are continuing to drop, according to State Department data. As of Aug. 12, more than 10 months into the federal fiscal year, 6,281 SIV holders have arrived in the United States and been provided reception and placement assistance.

In Sacramento, one of the top destinations for SIV holders, the effect has been noticed. Hamidullah Hamidy, a refugee resettlement caseworker at local nonprofit Opening Doors, says he’s doing these airport runs a lot less these days.

DinMohammed and his family are among the fewer and farther between.

The baggage carousel’s rubber tread jerked to life. Eventually, seven beige suitcases wrapped in clear plastic tumbled out, one for each family member.

Think of packing up all you own. Think of what you’d leave behind.

If DinMohammed and his family were understandably jet-lagged, Hamidy and the volunteers seemed caffeinated by the culmination of their efforts. They spent the day before this midnight run assembling bunk beds in the family’s new two-bedroom apartment in Arden Arcade.

“It is our job,” Hamidy said, grinning. We are enjoying.”

Hamidy doesn’t get to do this nearly as much anymore. It’s not just SIV admissions that have plummeted, of course. Asylum denials rose for the sixth straight year last year to 65%, according to Syracuse University’s Transactional Records Access Clearinghouse. That doesn’t account for the tens of thousands who haven’t even been allowed to request asylum because of travel bans on their countries or the deliberate bottle-necking at the U.S.-Mexico border.

To Hamidy, it’s as if there are more case workers than people to help “because of the ban,” he said. “Although we do have a lot of people in the pipeline, but they’re all waiting.”

In America, on the other side of safety, the helpers wait, too.

A week after the airport pickup, the family sat in their new apartment in their new neighborhood in their new country. The youngest, an 8-year-old girl, popped her head out of her room but mostly stayed hidden from view. Seven pairs of shoes lined up by the door. Trays of nuts and dried fruit and tiny cups of bright yellow tea had been set out for guests.

A month ago, DinMohammed said, the family was in Kabul. He worked 12-to-15-hour days, seven days a week, driving retired military brass from the airport to a base where they oversaw the training of Afghan soldiers. His wife ran the household, his kids walked to school; it was a spartan life and increasingly anxious. Because he and a brother who had already been granted an SIV worked with the U.S. military, DinMohammed was on the wrong side of the Taliban. (Security concerns are why SN&R is not using the family’s surname.)

“Overall, all Afghanistan is insecurity,” DinMohammed said through Hamidy, who translated. “Insecurities, suicidal attack, explosion everywhere, and you never know what’s gonna happen like in a few seconds. And … whoever have a good life is all the businessmen and trader who was like connected with the politicians, and that’s it.”

The family is hoping for something better here, but uncertainty looms. Opening Doors only had the budget to front three months of rent. Sacramento County’s welfare office will sub in, but ultimately it’ll be up to DinMohammed and his family to come up with the $1,300 that this small, first-floor flat demands.

By mid-August, Hamidy said, all the children were in school, the eldest daughter was eagerly pursuing her driver’s license, and DinMohammed had already applied for a host of rideshare gigs.

They’d escaped international instability, only to land in Sacramento’s affordability crisis. But DinMohammed and his family weren’t complaining. At least they still had the opportunity to pursue the American Dream, however distant it appeared. Thousands of foreign allies won’t get the same chance.

Be the first to comment on "Last refugees in"