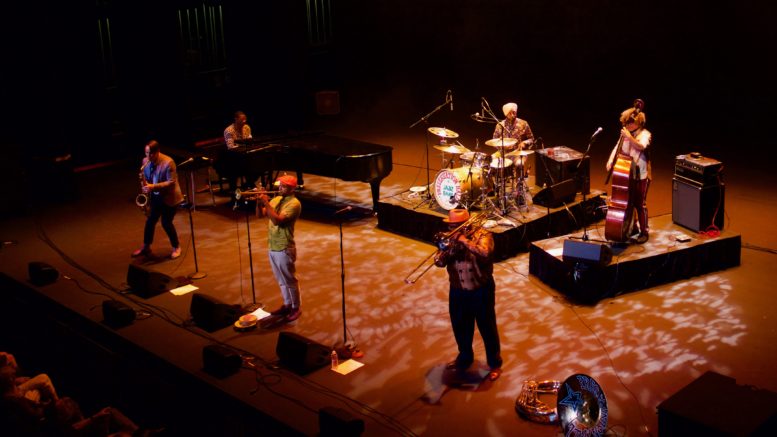 The Preservation Hall Jazz Band gets the crowd out of its seats during at show at the Harris Center for the Arts on Aug. 5. Photo by Scott Thomas Anderson

Local crowds have flocked to bands offering a little taste of New Orleans fire; but the true defenders of the Crescent City’s flame recently performed in Folsom, showing just how scorching their blare of brass dynamism can be – and just how connected it is to the sonic history of the Caribbean.

While different line-ups of the Preservation Hall Jazz Band have wowed audiences since the 1960s, its current ensemble of players is unique: They’re not only stoking the primordial coals of America’s original art form, they’re also blowing a new heat into the tradition through original songs and duets with performers as diverse as Nathaniel Rateliff and Tom Waits.

And, as evidence from a new album and documentary film, their evolution isn’t slowing.

Musically, PHJB is known for combining the highest feats of technical achievement with the rawest kind of emotional improvising. Yet the septet can also kick-up the energy by mustering that “big four” force of New Orleans brass power. It’s something audiences at the Harris Center for the Arts got a taste of on Aug. 5 and 6.

“Big four” references the hot, half-skipping beat that allows for so much freedom within Big Easy musical expression. PHJB hit Folsom fans with it hard in their opening numbers, shifting from swinging magnetic flourishes to roaring and explosive flights. As always, trombonist Ronell Johnson wielded his instrument along the edge of the stage like some sliding fusion of a witching rod and a golden long-rifle.

The first half of the show also included saxophonist Clint Maedgen bringing an agile snarl to his vocals on “Tootie Ma is a Big Fine Thing” and trumpeter Branden Lewis putting some creole care into Pete Seeger’s “If I had a Hammer.” The second half of the evening, by contrast, showcased how PHJB can merge traditional jazz with pure Latin lighter fluid. It’s a new stage in the band’s identity.

Blue Fox Entertainment recently released a documentary on PHJB called “A Tuba to Cuba,” which follows the band’s first adventure into the streets of Santiago. Two weeks ago, Sub Pop Records issued an album of the songs that resulted from the trip under the same title. Both capture a transformative moment, says bassist and bandleader Ben Jaffe, whose father was a founding member of PHJB.

“New Orleans, Cuba and Haiti have this long history together; because not only were we trading goods, we were also influencing each other’s culture,” Jaffe told SN&R. “So, there was this sister-city kind of connection – this triangle that happened for hundreds of years … The trip had a lasting impact on us. There’s more confidence in our rhythm now. There’s more emphasis on putting the rhythm up front in the music.”

“A Tuba to Cuba” is now streaming on Amazon Prime. Whether fans see the film or buy the album, Jaffe thinks both mediums offer a rare glimpse to a joyous moment of human connection.

“It’s very emotional, but it’s uplifting,” Jaffe said of the Cuba experience. “We were meeting this extension of our music family, and that’s a really important thing to do, and to understand.”