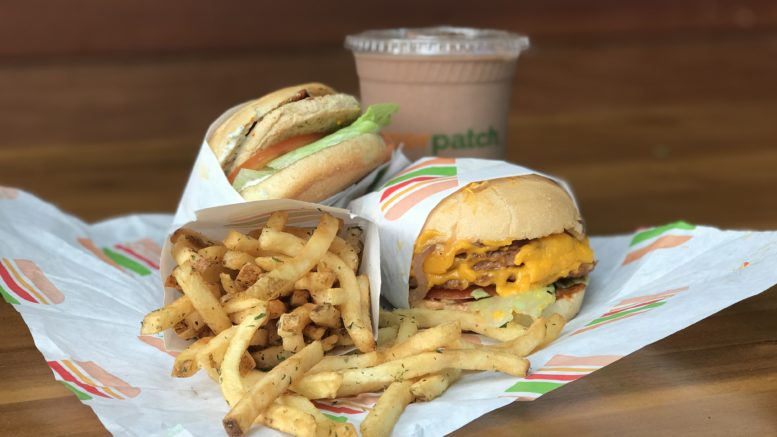 Vegans and vegetarians rejoice! Your burger and milkshake dreams are about to come true. (Photo by Lindsay Oxford)

For vegans, the prospect of a restaurant where we can eat everything on the menu is dizzying. In most places, we’re lucky if there’s one thing we can eat, whether it’s appealing or not (kick rocks, pasta primavera). And for those of us who haven’t been veg since birth, a burger-and-fries joint can still evoke nostalgia.

While Burger Patch’s menu is all-vegan, it leans heavily on meat analogs, mimicking the vegetable-free wasteland that is traditional fast food. This isn’t bad, necessarily: If you’re looking for junky comfort food, Burger Patch is exactly the fake-meaty place you’ve been dreaming of.

My favorite burger was the BBQ Patch (Beyond patty, fake bacon, fake cheese, barbecue sauce). It’s sloppy and greasy-but-not-too-greasy—but at $12, it’s a stretch to imagine this being more than an occasional treat for most people. Its cheapest burger—the faux cheeseburger Patch—is a little less than $8. If you’re seeking a fake poultry vibe, the Ranch ($9) is what you’re looking for. It’s less messy than the BBQ Patch, but its slightly too-dry combo of fake chicken and bacon with vegan ranch dressing is tough to swallow. It’s very, very easy for one person to run up a $25 tab here.

Burger Patch offers a couple of sides that are also a bit pricey: An order of nicely deep-fried, but unexciting faux-chicken tenders known as “A Bunch” costs $6. A small order of fries (“A Shovel of Spuds”) is $3.

Vegans know their French fries. All vegetarians—but especially vegans—are by necessity French fry connoisseurs. We’ve had every permutation of fry, and we know good from bad. So Burger Patch’s fries are a bit of a letdown. On both occasions, the fries came out room temperature and starchy. There was evidence of some kind of herb on the fries, but the taste didn’t come through, and there was no greasy, salty goodness to redeem them. I may pass on my next visit. The idea of a burger without fries makes my heart hurt.

Where Burger Patch really shines, though, is with its shakes: This is one place where a $6 price tag is completely warranted. The vanilla shake was absolutely perfect—it actually tasted like vanilla, as opposed to my memory of fast-food shakes where vanilla was code for yet-to-be-flavored frankenfood shake base. The chocolate is very good, too, with a flavor that reminds me of what I think Nestle Quik tasted like. I’d love to see how they do with a strawberry shake. These shakes are worth checking out regardless of how far you fall down the fake-meat rabbit hole.

Burger Patch’s burgers are Beyond, their ersatz chicken is Gardein and the fake bacon tastes suspiciously like the Sweet Earth brand. Why would you pay three-to-four times as much for what you’d microwave at home after a long day? The answer is nostalgia, and for that, they’ve got you covered.

The Burger Battle winner is …

Be the first to comment on "Review: Burger cravings"