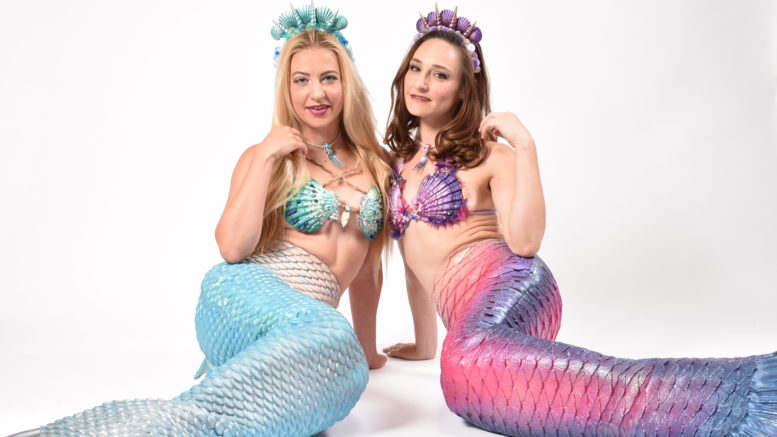 Merpeople are having a mer-moment. Some of the credit goes to Rachel Smith, a professional mermaid, Dive Bar O.G. and founder of Mermaid and Mom, who, along with her equally fantastical partner, Ashley Rastad of Pixie Tribe, are hosting California’s first surface world gathering for her shimmery kind. The three-day California Mermaid Convention shakes its fin next month with a launch party, various workshops and lectures aimed at adults, teens and guppies, and culminates with an environmentally conscious cleanup along the American River. SN&R spoke with Mermaid Rachel about the origin(s) and evolution(s) of her species—and whether it’s possible to get pink eye under the sea.

Am I catching you above ground?

(Laughs.) Yeah, I am currently not underwater, so we’re doing good.

Sacramento hit its first heatwave this week. How does a mermaid keep cool?

Do you have a mermaid name or is that a dumb question?

No it’s not a dumb question. A lot of mermaid performers do use stage names. I do not. I go by “Mermaid Rachel”—which is my real name—for a couple reasons: One, when I first became a professional mermaid, it was because I was working at Dive Bar, where I still work, and we were trying to figure out if we were going to have mermaid names and we decided not to because, y’know, girls working in a bar kinda don’t want to have names likes “Honey” or “Princess” or that sort of thing. So we went with our real names. And also the most successful working mermaids at the time were just going by their real names with sort of an honorific of “Mermaid” added.

What is the California Mermaid Convention?

It is running July 12th-14th in a couple different locations around the city. Dive Bar is where we have our launch party on Friday night. Rush Park Community Center [is] where the main convention is being held. And our Sunday, which is actually entirely free … [is] taking place in old town and then we’re doing a river cleanup along the American River.

Oh cool. So it has a definite environmental bent to it.

Absolutely. That’s such a big part—we feel as mermaids—being stewards of the environment.

This is the first statewide convention?

So it has evolved gradually. … The Mermaid Promenade was sort of the first thing that kicked it off, and this year is going to be the ninth year. … And it would’ve been the fifth year for Mermaid Week in Sacramento, but all of the organizations decided to combine everything and make one large convention with all these really, really cool events.

What would you attribute this renaissance in mermaid culture to?

I think it’s probably a few different things. Mermaids have always been incredibly popular, right? People have mermaid stories and songs in almost every culture in the world, dating back to antiquity. So mermaids have been with us for a very, very long time. I think this modern reinvention is due to the fact that a lot of people, myself included, grew up watching things like Splashand The Little Mermaid. We are all adults now (laughs) in the best sense of that word. And we either want to share that with our kids or we’re really, really drawn to it for ourselves.

Why should a two-legged land-lubber like myself check out the convention?

(Laughs) I think there are so many good reasons. If you’re someone who’s interested in photography, we have options for modeling and taking pictures as a mermaid. If you’re looking to become a professional mermaid, we have some workshops that will teach you the basics of how to swim and things like that. We have teen workshops on building self-confidence and navigating the world and social media from a mermaid’s perspective. And then there’s a bunch of stuff for families and kids, too.

We have this—it’s so, so cute—it’s called the Mermaid’s Royal Breakfast. It is a two-hour experience at the very beginning of the con where kids and families get to come and hang out with the Mermaid Royal Court. There’s harp music, there’s story time, there’s going to be coloring. And after they eat, they get to swim and see a special hoop show.

Are there any prohibitions on how soon the kids can swim after eating?

Well, you know, you have to wait for an hour, so that is why it is a two-hour event.

You guys have really thought this out.

Has mermaid culture changed over the years?

I think it has. I think that people’s ideas of things go in and out of fashion. A few of the first myths about mermaids were actually about male mermaids—way, way back with the Mesopotamians and all those folks. … Selkies [half-seal, half-human creatures from Scottish folklore], a lot of them were male. People forget these old stories. … That’s why we’re going to have a lecture by Merman Jax, who’s the most successful merman out there. … If you think being a professional mermaid is a niche industry, try being a professional merman (laughs).

How long have you been a mermaid?

I’ve been with Dive Bar since we opened [in 2011]. … Before that … I’ve danced hula all my life. So I was a performer and my mom was a seamstress, and when I was in high school, I got this idea in my head that I was going to make a mermaid costume I could swim in. And my mom said I was gonna drown (laughs). But she made it for me anyway.

I’ve always wanted to ask a merperson who swam in Dive Bar … does stuff ever get in your eyes, like fish poop?

(Laughs.) We’re literally swimming in a tank with fish, so, I mean, the water’s in our eyes, our ears and nose—everything.

Essay: Not backing down

Be the first to comment on "Q&A with Mermaid Rachel, co-founder of the California Mermaid Convention"