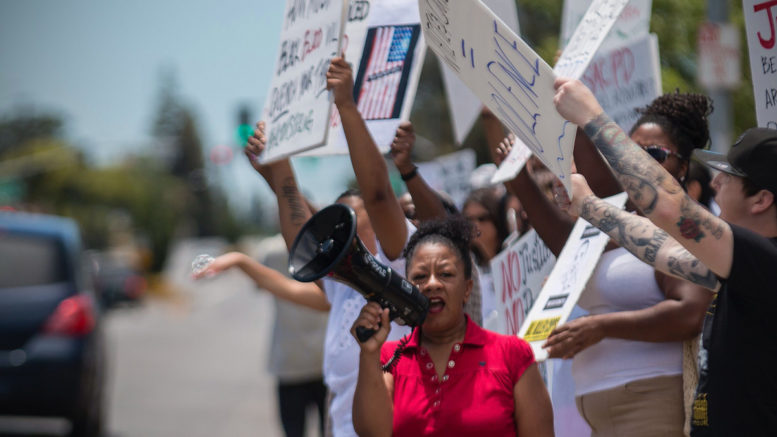 With its founder rejecting calls to resign, where does the local chapter go from here?

Public accusations of abusive behavior against a leader who won’t step down have opened up a painful rift in the Sacramento chapter of Black Lives Matter.

Behind the unsettled questions about the chapter’s future is a difficult-to-encapsulate moral about the traumatizing ripple effect surrounding police shootings, even on grassroots activists who stare into that abyss.

Nearly four years into its existence, BLM Sac has become an influential voice on issues of race, particularly law enforcement killings of black men. Just like the national movement from which the local chapter branched, Black Lives Matter quickly became a necessary counterbalance to the lingering inequity that made its message necessary in the first place.

For the groups’ volunteers, most of whom are black women, the work is meaningful but also exacts a toll.

That partly explains the current stalemate, more than two weeks after 20 people confronted BLM Sac founder Tanya Faison with an ultimatum she has thus far refused to accept. Whether BLM Sac can rebound from this moment or splits into competing chapters—as has happened in other cities—may depend on the choices of a few people who were once allies.

On May 29, hours after nearly 30 past and present members of BLM Sacramento signed an online letter denouncing “a pattern of wide ranging harm and manipulation,” Faison told SN&R she wouldn’t resign from a chapter she founded in October 2015.

“I’m not stepping down,” Faison said. “And I’m not being ousted. I cannot be ousted unless it’s from our board.”

Faison said she convened this new board sometime after May 24, after she’d heard rumors she was going to be asked to leave and started assembling loyalists. Faison said the chapter now consists of her, three mothers of shooting victims she’s worked with and two other individuals, all of whom have signed commitments that Faison said she now requires as proof of membership.

“Our board consists of mothers that I’m fighting for, mothers that have lost people to police violence,” Faison said. Referring to the signed commitments and fledgling board, she added, “That’s what determines who is what in this chapter. And that’s who I answer to.”

At least one of those mothers has rescinded her commitment, according to Sonia Lewis, Faison’s former cocaptain who signed the letter calling for her to step aside. Lewis took to social media to criticize Faison’s moves to retain control.

“Who scrambles to create a new board when they are in the hot seat. … may the fires from the pit of hell torch these attempts to further deceive this community,” Lewis tweeted May 30.

Lewis is among 29 people who identified as current, former and inactive BLM Sac members whose names appeared on the May 29 letter publicly denouncing Faison for alleged abusive behavior dating as far back as 2016.

“This wasn’t a decision that was made lightly,” Lewis told SN&R on Tuesday. “This was a culmination of events years in the making.”

Lewis said a chapter that grew to around 30 members had dwindled down to only four people by the time things came to a head last month. Lewis said she and other core members didn’t fully grasp why the chapter was shedding members until several came forward with accounts of feeling shamed or steamrolled by Faison.

“Hands down, all of their stories were the same,” Lewis said.

In a widely seen Facebook post from April, Khaya Osbourne outlined a litany of criticisms against Faison, describing her as a social media bully who blocked, condemned and intimidated anyone who disagreed with her or threatened her status.

“I’m sick of hearing whispers upon whispers with everybody feeling too scared or feeling like they need to be loyal [because] she fights for black people,” Osbourne wrote. “I’m telling you right now that TANYA FAISON is abusive, manipulative, & not fit to lead BLM Sacramento.”

Without naming Osbourne, Faison referred to the post and said it started the campaign against her. (Osbourne didn’t reply to a Facebook message seeking an interview.)

Faison said she learned the degree to which current and former chapter members were upset with her behavior on May 19, when 20 carried out a quasi-intervention. Lewis described it as a “come-to-Jesus” meeting in a May 29 Facebook Live video, in which she also apologized for being complicit in letting Faison abuse her authority and admitted taking part in “fabricating” the attack on fellow activist Jamilia Land. For five hours, people sat in a circle and took turns telling Faison how she had hurt them.

Faison said she thought the meeting would be an opportunity for her to repair relationships, and only realized later that those who attended had already made up their minds.

“I just listened to everybody’s grievances,” she told SN&R. “And some people cried. And I really wanted to make space to fix whatever wrongs that I’ve done as far as hurting people, because I don’t want to hurt people that I call ‘family.’”

But Faison also suggested this conflict was about money, saying a grant had recently come through to make her BLM Sac’s only paid employee. Her first paycheck arrived May 22, she said, a week before the letter surfaced. Before that, Faison, a former Apple employee, said she was living off her savings and financial help from her friends.

“All of this kind of sprung up when I started to get paid,” she said.

Lewis confirmed that the California Endowment was in the process of providing a grant to supply a salary for Faison, but said she and another core member were the ones who applied for the grant.

This isn’t the first time BLM Sac members have expressed concerns about Faison.

As SN&R contributor Kris Hooks noted on Twitter, the national Black Lives Matter office was asked to mediate disputes involving her leadership in March 2016, when nine members of the Sacramento chapter sent a letter accusing Faison of running the chapter without transparency or input from others.

What happens next to BLM Sac—and what it would look like without Faison—is unclear.

“We built bridges with these organizations and she burned those bridges,” Lewis said. “Every bridge that was built, she would find something wrong with it.”

Lewis said her group has received assurances from BLM national that multiple chapters have been able to coexist in other cities. Lewis said her side has regrouped under the name Sacramento for Black Lives. They have their own Twitter account and number “four strong,” Lewis chuckled. But she expected the group to attract many of the former members who were put off or put out by Faison.

“It will be a beautiful rebuilding, like the phoenix coming out of the fire,” Lewis said. “I can’t wait.”

As for Faison, she said she stayed home for two days after the May 19 intervention. She credited a meeting with a mother whose son died under mysterious circumstances in 2016 for helping her realize her next move.

“That’s when I realized I’m not going to stop doing this work,” she said. “Because people need me and I need this work. This is what keeps me going, to do something you actually care about and that you’re passionate about. And so I’m not stepping down. I can’t. It won’t be healthy for me to step down. I will learn from this though.”

For some of Faison’s former colleagues, however, it’s too late for epiphanies.

In a letter posted to the Allies of BLM Sacramento Facebook page, chapter members Onethia Riley, Lesa Johnson and Lewis demanded that Faison publicly resign, relinquish her control of BLM Sac’s social media pages and physical resources, and cease communication with the media and relatives of those killed by law enforcement. They also demanded Faison turn over all financial records, particularly those documenting her use of donations to BLM Sac.

None of that has happened, Lewis said this week.

Lewis said she hasn’t closed the door on working with Faison again, but that it could only happen if Faison accepts their demands, seeks help and stays away for at least a year.

With Faison giving no indication she’s accepting that deal, Lewis said they remain at an impasse. Lewis isn’t unsympathetic to the former comrade she now says needs to step aside for a while. She said Faison has good reason to feel like she “built this movement.”

But that, too, was the problem. Lewis, a married mother of six, said Faison hasn’t cultivated a life outside of her activism. She came to guard her role jealously and perceive threats to it where there were none, Lewis said.

“I believe she has an addiction to the power she was given,” Lewis said. “I don’t want to vilify her or cause more trouble in her life. But at the same time, this work has to get done.”

A balanced plan for roads and transit?