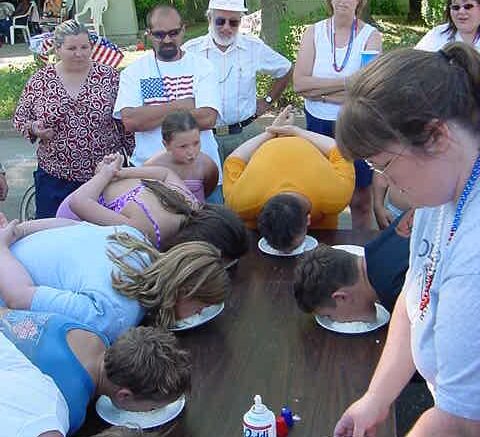 Neighbors compete in a pie eating contest during a July Fourth block party on Bootjack Drive in Sacramento in 2002. (Photo courtesy of Robin Epley)

Governments and businesses can still take bold action to limit global warming, but average temperatures are already rising. As climate change worsens, extreme weather will be more frequent and intense. This blog looks at what you can do to prepare.

Preparing for disasters, we often think about having enough food and water to hold out. But a significant factor is a lot less tangible: social connections.

How involved are you in your community? How far does your social network extend?

During the March 2011 tsunami that killed about 20,000 people in Japan, those living in communities with high levels of trust and social interaction had higher rates of survival. In another study by Daniel Aldrich, director of Northeastern University’s security and resilience program, researchers found that Facebook users were more likely to evacuate during Hurricanes Harvey, Irma and Maria if their friends-of-friends network on Facebook included more people in different geographic areas.

Community trust and social networks are examples of social capital. “The nice thing about social capital, like other forms of capital, is it can be built,” he says.

Cities can invest in parks, libraries and other public spaces. Individuals can take even simpler steps:

Questions about emergency preparation? Let us know in the comments to this blog item or by emailing townsendtess@gmail.com or sactonewstips@newsreview.com and we’ll try to cover it in a future post.

Be the first to comment on "Living with climate change: Throw a block party"