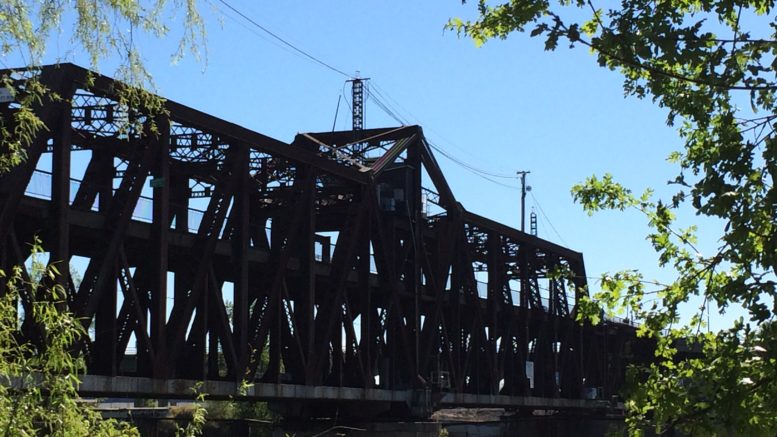 The 108-year-old I Street Bridge is slated for replacement. (Photo by Foon Rhee)

The I Street Bridge is 108 years old and rusty, and it rattles when a train passes over it. So, yes, a new span over the Sacramento River is way overdue.

But the new bridge is not just another important transportation link between Sacramento and West Sacramento. It’s also an opportunity to make a design statement for the region.

At this point, there are nine concepts in the running. Some of the most eye-catching are also the most expensive. What a shock.

The cheapest are basic, traditional designs, while the costliest are more intricate, including one that looks like an atrium and another that’s called “Solar Arch.”

I’m partial to one of the four designs in the “medium” bucket. Called “Garden,” it’s supposed to look as though the paths along the river extend across the bridge. It would feature trees and plants that would move up and down with the span.

The engineering firm—T.Y. Lin International, part of the joint venture that designed the new eastern span of the San Francisco-Oakland Bay Bridge—says that has never been done before on a bridge anywhere in the world. And what better for the City of Trees?

Quite a few other Sacramentans agree with me. The city just released results from an April online public survey on the designs. About 1,350 people responded, picking their four favorite concepts. “Garden” received the most support, by far, with nearly 750 votes.

The survey also asked if people preferred a simple and streamlined (20%) or elaborate and spirited (15%) design, and one that is highly visible and stands out (25%) or is understated and blends in (15%) with the surroundings. It inquired what design inspirations the bridge should take, including Tower Bridge (19%), the state Capitol (6%) and Golden 1 Center (10%).

The city plans two more community meetings before a design concept is picked at the end of the year. The final design and land purchases are to be complete by the end of 2020. Construction is scheduled to begin in the summer of 2021 and be finished by the end of 2023.

Staying on that timeline depends on funding, of course. The cities of Sacramento and West Sacramento have about $139 million in hand, more than half from the feds. The remainder of what’s needed would come from state and federal grants.

The current I Street Bridge will stay open. The lower deck will continue to be used for passenger and freight trains, while the upper deck will be closed to vehicles and be converted into a pedestrian and bike path.

The new bridge is just up river and will connect Railyards Boulevard on the edge of downtown Sacramento, and C Street in the Washington neighborhood in West Sacramento.

Whatever the design, the new bridge will include some functional basics: one vehicle lane in each direction, a center turn lane and bike lanes and pedestrian paths in both directions. It will be a lift span, rising vertically to allow ships to pass underneath.

Still, it would be nice if the design stood out. If the city picks the right one, maybe someday, the new bridge will become a landmark, as iconic as the Tower Bridge.

Exclusive: Death certificates spiked in Sacramento during the pandemic

Dr. BJ Miller is the keynote speaker at an end-of-life conference this Friday in Sacramento

Be the first to comment on "Editor’s note: A bridge to somewhere"