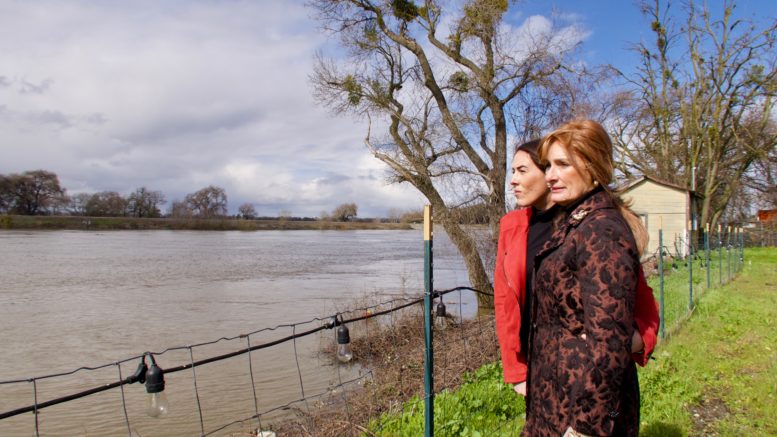 Donis and Angelica Whaley’s family has already been the target of eminent domain twice during their time in the Delta. Photo by Scott Thomas Anderson.

Donis Whaley woke up one recent night and realized it was all happening again.

Whaley and her cousin Vesta Zwakenberg can still envision Port Chicago’s quaint cottages and Victorian homes along the water. But in 1965, the federal government decided Port Chicago could no longer exist because it needed to add a secured riverfront to the Concord Naval Weapons Station. The town’s families were informed the government was starting an official condemnation process on their lands. By 1969, naval authorities had demolished nearly every trace of Port Chicago.

It was the erasure of a place—and an example of eminent domain.

Deja vu came in 2016, when the California Department of Water Resources decided it wanted to take control of 500 acres of land Whaley and Zwakenberg’s family owned on Winter Island in the central Delta. The family says they didn’t want to sell, but eventually received a letter from the state indicating they’d face eminent domain if they didn’t.

Now, the Whaleys’ thriving business in the north Delta town of Hood sits right in the crosshairs of California WaterFix, surrounded on all sides by properties that may be targeted for eminent domain seizures to make way for three 1,000-foot-long steel and concrete pumping intakes along the Sacramento River.

According to attorneys representing Delta counties, the recent announcement that Gov. Gavin Newsom favors a one-tunnel conveyance system does nothing to eliminate the threat of government seizures.

“It’s an insidious process when the government wants to take your land, and it doesn’t just happen overnight,” Whaley said. “I feel it’s something you can never get back. They take what your family worked for, what they earned, what they built. They take what your family thought it would have for generations. … It’s heartbreaking. It changes of the lives of everyone.”

It didn’t take long for the applause to die. When California’s new governor announced during his February 12 State of the State address that he didn’t support WaterFix as a two-tunnel behemoth, he received a loud burst of applause. Yet, in the next breath, when Newsom added he supported a one-tunnel version, no applause followed.

That’s partly because the one-tunnel announcement hasn’t alleviated fears of people living on the north side of the estuary. Hood, Clarksburg and Courtland property owners still face the very real possibility of being hit with eminent domain, said Tom Keeling, an attorney representing four Delta counties in two separate lawsuits against DWR.

“No matter if it’s one tunnel or two, the state of California is going to need right of way on some properties and to fully acquire other related interests,” Keeling said. “It would be an intense need for private property.”

Project design documents from DWR’s Environmental Impact Report show that not only will any tunnel system need massive pumping intakes, but to build them the state will also have to acquire additional acreage for construction yards and geotechnical exploration zones. DWR’s concept maps suggest that the department would need to take control of the majority of land along a 6-mile stretch of the river’s east bank.

Last week, spokeswoman Erin Mellon said that her department has not decided if its new version of WaterFix will now have three or two intakes. She said that DWR does not intend to start a new Environmental Impact Report or seek new permits for WaterFix because its position is that it adequately analyzed “a staged approach” to the project last year that included a one-tunnel opening phase. That data wasn’t included in the project’s final environmental review.

“We expect to provide supplemental information including new modeling,” Mellon wrote in a statement.

From Keeling’s perspective, regardless of whether DWR tries to build two intakes or three, the department will likely have to initiate numerous eminent domain proceedings. Keeling bases that view on recent history. Between 2009 and 2017, Keeling represented landowners in five Delta counties in a lawsuit meant to block DWR from entering private properties to conduct soil and other scientific tests related to the twin tunnels. He said more than 125 property owners in the Delta didn’t even want DWR to set foot on their land. After battling all the way to the California Supreme Court, only a half dozen residents were ultimately ordered to allow DWR access to their properties. Keeling believes that’s a weather vane.

“Given the devastating consequences of the tunnel scheme for the community, economy and agriculture of the Delta, I suspect you’ll see a lot of landowners digging in their heels and fighting tooth and nail,” he said. “I don’t expect to see a lot of voluntary sales.”

Osha Meserve, an attorney who is coordinating 17 different lawsuits against DWR under the California Environmental Quality Act, also said the department is on tenuous legal ground if it doesn’t restart its EIR and permitting processes from scratch. That issue will first be ruled on in Sacramento Superior Court and then likely end up before higher courts.

“Whether or not it’s one tunnel or two, the impacts to the environment would still be enormous,” Meserve said.

Keeling is also getting ready for more legal duels, especially if DWR gets far enough along to start trying to buy or condemn properties.

“If that happens, it will be a battle royal,” he said.

On a sunny morning in the Delta, Angelica Whaley wandered through Hood’s pear-packing plant and talked about its future. She and her mother, Donis, have been renovating this historic landmark along the river for nearly a decade. In 2016, they unveiled it as a new business, the Willow Ballroom and Events Center. The venue offers a spacious maze of white curtains and garden lights mingling with the Stillwater’s old, crimson brickwork. So far, the setting has been a hit for weddings and nonprofit galas.

“A lot of them are not familiar with this beautiful Delta region,” Angelica Whaley said. “They love coming here and they love being in this repurposed space.”

Restoring antiquated buildings along the Delta has injected some economic excitement in the small towns. That includes the Hood Ranch Kitchen, which is anchored in a store from the 1920s that is directly across the street from the Willow Creek Ballroom.

Like the Whaleys, the Hood Ranch’s owner, Vonne Matney, doesn’t know if DWR will ultimately try to condemn the entire town of Hood, which sits in the footprint of one of the intakes under WaterFix’s current design. What is clear from the project’s EIR is that even if Hood is allowed to remain, Matney will have many neighbors to her north and south that will have to sell or face condemnation.

“Eminent domain is a situation where there is just nothing you can do about it,” Matney said.

Matney added it’s hard to imagine businesses like hers or the Whaleys’ being able to function with the documented construction impacts for the intakes. Those include major excavations, deep dredging, steel pile-driving, levee dismantling, well-draining, dust debris and nonstop truck convoys.

Delta families worrying about eminent domain recently saw a few developments in their favor. In November, staff for the Delta Stewardship Council, a government oversight body, determined WaterFix had not met an important legislative threshold to move forward. Then on February 1, state Senator Bill Dodd introduced Senate Bill 204, which would give the Legislature direct oversight over any contracts DWR attempts to sign related to WaterFix. A few days later, U.S. Senators Dianne Feinstein and Kamala Harris introduced the Sacramento-San Joaquin Delta as a National Heritage Area Act, which would establish much of the Delta region as a special zone managed by the Delta Protection Commission. That agency has been protesting WaterFix.

While those legislative moves cast doubt on the project’s future, attorneys for the Delta counties are quick to stress that none of the developments, including Newsom’s announcement, have slowed down the work of two little-known joint powers authorities set up by former Gov. Jerry Brown. The Delta Conveyance Design and Construction Authority and the Delta Conveyance Finance Authority have been meeting every month at Sacramento’s downtown library—including last week—to initiate investment strategies and sign contracts to move toward breaking ground on WaterFix.

Brian Thomas, executive director of the Delta Conveyance Finance Authority, confirmed that both agencies are tasked with keeping the project moving forward, though he acknowledged Newsom’s announcement has raised a lot of questions.

“We don’t know what the project would be and what other processes would need to occur,” Thomas said. “We’re still working with our lawyers to figure it out.”

During public comment at the agency’s February 21 meeting, Meserve called out Thomas and his board of directors for continuing with their work without waiting to see where the Legislature and courts are going.

“It seems wasteful and reckless to move forward on this path,” Meserve told them.

Be the first to comment on "Under the Delta’s domain: One-tunnel pivot doesn’t change likelihood of widespread eminent domain seizures"