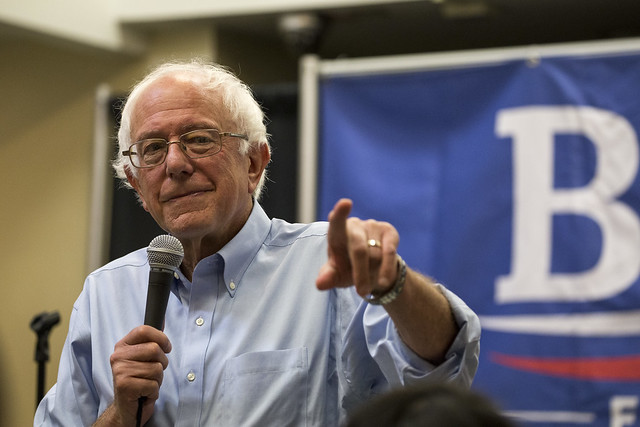 Sen. Bernie Sanders returns to Northern California this week to resume his upstart presidential campaign, but is the magic still there? (Photo by Phil Roeder via Flickr)

Four years after he almost wrested the Democratic presidential nomination from Hillary Clinton and—who knows?—potentially averted the darkest timeline, Vermont Sen. Bernie Sanders is again trying to ride his populist platform of people over corporations to the White House.

But does Berniemania still exist in 2019?

Northern California could find out this week, when America’s favorite Larry David impersonator comes to see if his message still resonates with fervent crowds of young Berniecrats and the occasional podium-landing bird.

Sanders’ schedule puts him at a series of first-come-first-served events on Aug. 22-23, starting with a noontime town hall at the Chico Masonic Family Center on Thursday, then on to Sacramento for a 6 p.m. “Bernie 2020 Rally” at Cesar Chavez Plaza. On Friday afternoon, Sanders is set to slide down the progressive dial to discuss college affordability in San Francisco.

While somewhere north of 15,000 people turned out to see the willowy-haired one tax his outside voice at Bonney Field in 2015, local organizers are expecting a couple thousand to attend the outdoor rally at Cesar Chavez, where temperatures are predicted to reach the triple digits. And it’s not just the natural climate that’s changed for the worse since 2016.

Sanders’ Health Care for All plan and support for canceling student debt put him in the mold of an FDR-style liberal. But the rise of the Tea Party and Fox News and the weaponization of social media have manipulated the public into viewing bread-and-butter Democratic values as radical.

Sanders’ upstart run in 2016 showed his party there was still plenty of public support—and small donations—for a liberal economic and social agenda. Now, with his star potentially fading to the likes of Sens. Elizabeth Warren and Kamala Harris, Sanders seems to also be campaigning against an existential challenge: What happens when others grab the torch he lit and run with it?