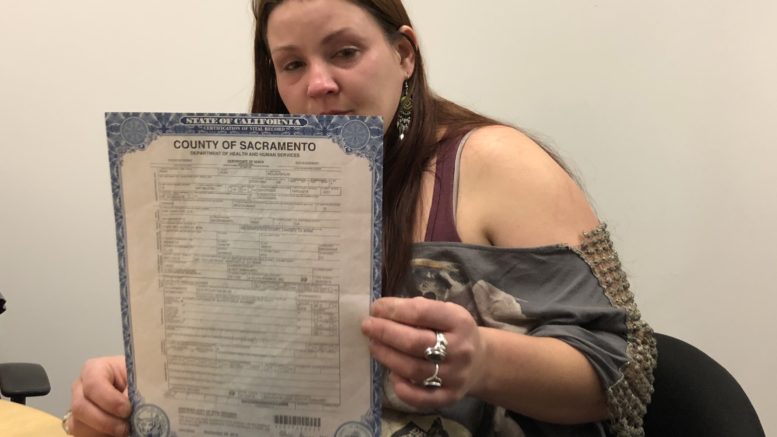 Heather Qualls holds up the death certificate for her mother Irma Jean McLaughlin, who died in September after an alleged fall at the Sacramento County Main Jail. (Photo by Raheem F. Hosseini)

Irma McLaughlin got hurt inside Sacramento’s jail, then died outside of it. The county doesn’t know how often that happens.

Heather Qualls dabbed a tissue at her reddened eyes and sank her hands back into the papers spilled across the table. Somewhere in there, she hoped, were answers to what really happened to her mother inside the Sacramento County Main Jail.

Irma Jean McLaughlin died on Sept. 3, 2018, just four days after a drug arrest put the petite 66-year-old in the aging facility, which had been red-flagged years earlier by the county’s own experts and condemned in a class-action lawsuit alleging inhumane conditions.

In June, the parties in the lawsuit reached a settlement that—if approved by a judge—will require the county and the Sheriff’s Department to improve the chronic understaffing and other failings that fostered an overreliance on solitary confinement and deprived inmates of basic medical care, according to inmate welfare groups Disability Rights California and Prison Law Office, which brought the class action.

But McLaughlin’s death last year wasn’t due to a suicide or medical condition. She was severely injured inside the jail, then transported to a hospital where she died. That change of setting erased McLaughlin’s name from the jail’s roll of two-dozen dead since 2014, according to figures kept by the California Attorney General’s Office.

As for the number of people who have died from the jail—no one really knows.

Sheriff’s deputies arrested McLaughlin and three others at a home on Marconi Avenue on drug charges on Aug. 30, 2018, booking logs show. Along with McLaughlin, two of the arrested were listed as residents of the home: Bruce Wayne Boatwright, 67, and William John Souza, 65.

Qualls, who lives close by, said Boatwright was her mom’s romantic partner, one McLaughlin’s children couldn’t pry her away from.

“He was a career criminal, but she loved him,” said Gloria Abernathy, a family friend.

“Boaty,” as he’s known, has a criminal record dating back 30 years in Sacramento County. His first conviction was in 1989 for possession of methamphetamine with intent to sell, which brought him two years in prison, according to online court records. From there, his record spans guilty pleas for receiving stolen property felonies in 1992 to a 2013 no-contest plea for selling or transporting methamphetamine. For the latter conviction, he received a three-year county jail sentence; three other felonies were dropped at the time of that plea.

In March, Boatwright pleaded no contest to one count of possessing methamphetamine for sale, and was sentenced to eight months in state prison, according to court records. Souza was convicted of illegally possessing ammunition, a misdemeanor, and given three years of informal probation.

The charges against McClaughlin were dropped.

Qualls and Abernathy said they tried to visit McLaughlin at the jail the day she was arrested, but were told there were too many visitors for them to be accommodated.

Qualls said she returned the next day and couldn’t find her mother’s name on the jail roster. When she asked why, Qualls said, she was told that her mom was in the medical wing, but wasn’t provided additional details.

When she and Abernathy returned on the third day, they say they were told McLaughlin had been released from custody.

They waited for McLaughlin to return home, and wondered why she didn’t. By nightfall, they called the Sheriff’s Department to report her missing. Because the jail is downtown, they were told they had to call city police. They say they did.

Eventually, Qualls received a call from a cousin saying her mother was at UC Davis Medical Center. They found McLaughlin on a gurney with a swollen face and gashed head, and were told that her spleen and intestines had ruptured.

When Qualls first saw her mother in the hospital bed, she said she pulled at the covers and blurt, “Who hurt you?”

Qualls said her mom grabbed her and repeated a phrase. Qualls thought her mom was saying she was dying. Qualls tried to reassure her that she wasn’t. McLaughlin’s eyes flashed and her grip tightened. Then Qualls said she realized what her mom was telling her.

“’They’re lying,’” Qualls said her mother told her. “They had to pry her hands off of me.”

“That was the last day her mother spoke,” Abernathy added. “She never regained consciousness after that.”

There are 109 pages describing the lengths to which medical staff went to keep Irma Jean McLaughlin among the living.

There are only eight pages explaining what happened to her inside the jail that ultimately led to her death.

The official story from the Sheriff’s Department is that the 4-foot-11 McLaughlin toppled off the top bunk in her cell while withdrawing from a gram-a-day heroin habit, striking her head and hip, according to a Sept. 1, 2018 casualty report, which McLaughlin’s family shared with SN&R. According to one deputy’s statement, McLaughlin’s left eye was swollen shut by a multi-colored bruise threaded down the middle with a dried, two-inch cut.

The report says a deputy first learned of McLaughlin’s fall at 1:41 a.m. that Saturday, but that McLaughlin was not transported by ambulance to UC Davis Medical Center until more than three hours later, at 5:10 a.m., after speaking to her third deputy.

A workup at the hospital showed that McLaughlin had fractured her neck and was spotted with hematomas. Within hours her stomach was hurting; a second CT scan showed significant blood in her belly, as well as “mesenteric hematoma,” a rare form of blunt abdominal trauma that is most commonly caused by seat belts in car accidents.

She was resuscitated by a massive blood transfusion even before she reached the operating table, where surgeons opened her stomach to discover internal hemorrhaging from multiple sources. Surgeons cut and clamped their patient, whose temperature plummeted. They emptied bags of plasma, packed absorbent sponges behind oozing organs and stitched her up to see if they would have a better chance at bringing her back in the ICU.

But the next day she was back on the operating table, where surgeons excised a segment from her small bowel and discovered a congested, bleeding liver that they suspected was caused by CPR. They slowed the bleeding with a laparotomy pad and were closing her back up when her pulse rate dropped again. They pumped her heart, but it was no use. They called time of death at 10:01 p.m. on Sept. 3, 2018.

How a relatively healthy older woman went from getting snared in a drug raid to deceased at the morgue has McLaughlin’s loved ones spinning their own theories.

“They’re brutal down there,” Abernathy said of the jail staff. “They need to be exposed.”

Twenty-three people died within the physical confines of the jail between 2014 and 2018, according to self-reported figures from the Sheriff’s Department.

Nine committed suicide by hanging, seven were said to die of “natural” causes, two were killed by other inmates, two overdosed, one suffered an unspecified accident and two died of undetermined causes, according to the California Department of Justice’s Open Justice data portal.

Of the four inmates who died last year, all were men who hung or strangled themselves and were awaiting trial at the time they took their own lives. That second part is especially common.

Only three of the nearly two-dozen dead had been sentenced for their crimes. The rest still enjoyed the presumption of innocence.

McLaughlin perished in a blind spot that masks the true toll the deteriorating jail exacts on the people awaiting justice inside, said Aaron Fischer, litigation counsel for Disability Rights California.

Fischer added that, because the letter of the law allows jails to “weasel their way out of” reporting deaths of inmates outside their walls, it “creates some perverse incentives.”

McLaughlin’s ambulance ride was one of 63 to originate from the downtown jail last year, and one of 164 since 2017, according to figures from the county’s Department of Health Services. Another 244 medical transports originated from the county’s other lockup in Elk Grove, the Rio Cosumnes Correctional Center, since 2017.

While the data doesn’t reflect the seriousness of the passengers’ conditions—or specify whether they were inmates, visitors or staff—McLaughlin isn’t the only person to die outside the jail from injuries sustained inside of it.

In June 2017, a 61-year-old inmate with cancer was savagely beaten by a mentally unstable cellmate being tried for murder. Clifton Harris was weak from chemotherapy treatments for small-cell lung cancer and had complained frequently about his solitary confinement and medical care.

Jail staff finally transferred him from solitary—what the Sheriff’s Department calls total separation, or t-sep—to an outpatient psychiatric pod, where they put him in a cell with a murder suspect who had also just been released from t-sep. Eight days later, that cellmate covered the cell with Harris’ blood.

Harris died eight months later when his family took him off life support. His assailant was never charged with the assault. Like McLaughlin, Harris’ death only came to light through the family’s efforts.

“If you have a critical incident, you should learn from it,” the litigator said. “And it certainly shouldn’t matter where a person dies. The opportunity is the same.”

Aside from the moral and ethical implications, ignoring such opportunities can prove expensive to taxpayers. Even without a judge’s approval of the settlement in the jail class action, the county budgeted $14 million for the fiscal year that started July 1 to increase staffing and medical care, and anticipates needing upwards of $118 million to build a wing for mentally ill inmates.

“They’re not waiting,” Fischer said of the county.

The perceived lack of transparency over what happened to McLaughlin has prompted her daughter and friend to seek answers in other ways. They filed a claim against the county, which is often a precusor to civil litigation. Abernathy said they’re pushing for that.

“She was a really nice lady,” Abernathy said. “She didn’t deserve to die like that.”

Be the first to comment on "What happened to her mom in jail?"