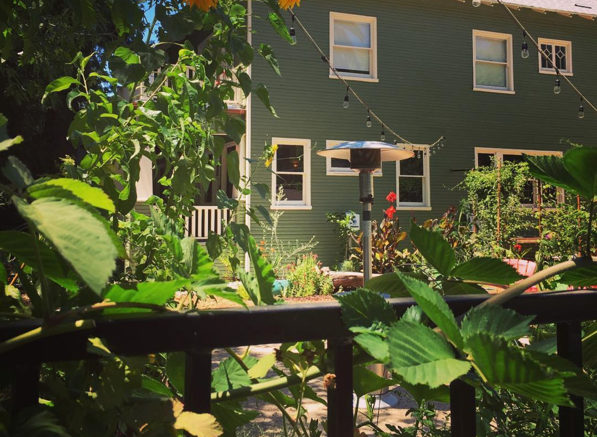 Holly Whitman’s garden at 28th and F streets will be featured on the Midtown Garden Tour. (Photo courtesy of GardentheGrid.com)

While gardening in Midtown, you never know what you’ll dig up.

“These homes were built before they had regular garbage pickup,” explained Holly Whitman, who lives and gardens at 28th and F streets.

Quite often, early Sacramento residents just buried their trash, and it has turned to treasure. In her garden, Whitman displays a collection of bottles and jars pulled from her soil: an empty blue-green bottle of Davis Vegetable Pain Killer (an 1840s opiate-laced concoction), an antique perfume bottle from Paris and several milk-glass jars labeled “Ingram’s Milkweed Cream” (a popular 1920s sunburn remedy).

History mixes with gardening for residents of The Grid, who will open their green spaces to visitors on Saturday for the second Midtown Garden Tour.

Make that “Midtown gardens and friends,” said Whitman, one of the tour’s organizers. “We opened the tour to anyone who gardens The Grid, not just Midtown.”

For $10, patrons get to see how 15 different households bring home Sacramento’s farm-to-fork message. They squeeze food-producing plants into all sorts of tight spaces on their city-sized lots. Four homes also boast backyard chickens, and two have beehives.

Besides the food, there’s an abundance of pure beauty—ornamental oases amid booming construction in the city’s core.

“We wanted to focus on hands-on gardening,” Whitman said of the tour. “It’s less about fancy pools and landscapes, more about garden building. How do you make a garden out of nothing?”

Whitman’s garden is a case in point; three years ago, it was a bare empty lot.

Having gardening friends helps. “Gardeners are so generous,” she said. “We share everything. During the tour, you’ll see some plants pop up in several different gardens. That’s because we passed some favorites around.”

Highlighting the tour will be the private garden of Daisy Mah, best known for her wondrous perennial-packed WPA Rock Garden in William Land Park. Mah worked for decades for Sacramento’s parks department. Now retired, she has more time to work on her own backyard.

“She’s a legend,” said Rebecca McDaniels, who also has her garden on the tour. “She opened her gate and our jaws dropped. She’s all about the pollinators. Just sit still; her garden is constantly in motion.”

Each gardener brings their own unique style to this tour.

“What makes it nice, we really garden with a variety of people,” said Joe Robustelli, who’s devoted his landscape to food production. “I have a large lot and very, very old fruit trees. My apricot tree produced 800 pounds this year.”

The tour will include a demonstration by ReSoil Sacramento, a community compost network that recycles green waste from local restaurants. “About 1,200 pounds of food waste went into my yard,” Whitman said. “And look at it now; my garden is so healthy.”

Be the first to comment on "Gardening the Grid"