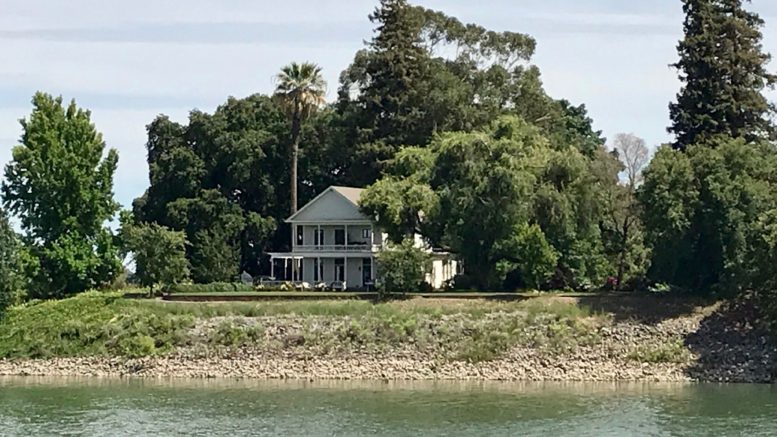 Employees from the state Department of Water Resources were recently caught drilling on private property without permits not far from the old Hemly estate. Photo by Scott Thomas Anderson

The standoff between Sacramento County and the California Department of Water Resources over the Delta’s future took a twist in June, moving from quiet canals and pear orchards along the river to a courtroom in the central city. That’s where county officials were granted a temporary restraining order against DWR to halt what they call risky and illegal drilling.

At issue is whether the state agency can use eminent domain powers to bore exploratory holes around Courtland without county permits. DWR is conducting the drilling to salvage some version of the controversial California WaterFix, which Gov. Gavin Newsom decided will be a one-tunnel project if it’s built.

But attorneys representing Delta communities and environmental groups believe a one-tunnel system still has the potential to negatively impact farms, water quality and historic resources in the region. Sacramento County continues to be one of 30 litigants waging a long-term legal battle over the project.

The county’s June restraining order is one of its most direct actions yet on that front. Meanwhile, Delta residents are worried what could happen if DWR is granted permission to drill again later this summer.

The county’s latest salvo against DWR started June 17, when Chris Hunley, a supervisor for Sacramento County’s Environmental Management Department, pulled up to property not far from the old Hemly estate near Courtland.

Hunley spotted workers for DWR and its drilling contractor, Gregg Drilling Inc., boring into the earth and determined DWR’s drilling crew had already hit a depth of about 25 feet.

“It’s my understanding DWR was drilling the bore hole at the site in connection with geological explorations for the Delta water conveyance project, previously known as ’WaterFix’ or ’the tunnels,’” Hunley wrote in a court declaration. “Neither DWR nor Gregg Drilling had applied for or obtained or stated an exemption from Sacramento County’s well permit requirement for any drilling work to be performed.”

Hunley issued a stop-work order to everyone there.

Three days later, attorneys for the county appeared before Sacramento Superior Court Judge David I. Brown to request a temporary restraining order against DWR on the grounds it was threatening the area’s drinking water.

“Unregulated drilling … can be harmful and detrimental to water quality, including potable drinking water supplies,” Hunley wrote in court filings. “The drilling can remove or open up preexisting underground geologic layers between aquifers and expose groundwater resources to pollutants, contaminants and sediments from other aquifers that had no prior hydrologic connection.”

Representing DWR, state Deputy Attorney General Bruce D. McGagin argued that the state can ignore county regulations because it was granted limited access, via eminent domain, to the property from San Joaquin Superior Court in 2017.

“This court lacks jurisdiction to hear the matter,” McGagin wrote, emphasizing that the previous court order not only allows DWR access to the property under its powers from the state water code, but that the San Joaquin County judge took “due consideration of constitutional and statutory requirements” when making his decision.

But Tom Keeling, one of the main attorneys involved in the San Joaquin County case, says it’s not that simple. Keeling represented some 125 landowners in five Delta counties trying to block DWR access to their lands for scientific testing. That was back when the WaterFix project was better known as “the twin tunnels” and was being championed by then-Gov. Jerry Brown.

Keeling said that DWR was only granted access to a handful of properties. More importantly, he says, DWR failed to include Sacramento and San Joaquin counties as parties to the lawsuit and its conclusion.

Therefore, it’s Keeling’s legal opinion that Sacramento County officials are not bound by that court order.

“The issues litigated in that case bear no resemblance to the issues that would exist between the county and DWR,” Keeling told SN&R. “The county’s permitting is totally unrelated. … In my view, DWR is flat-out wrong on this.”

The next court hearing is set for early July. In the meantime, Judge Brown granted the county’s restraining order against DWR. “The state agrees to stand down on all activities,” Brown scribbled on the order in gnarled cursive.

Nicky Suard, owner of Snug Harbor Resort and Marina in the Delta, said that county officials and Courtland residents have good reason to worry about the drilling. In an addendum that DWR attached to its San Joaquin case, the agency acknowledged that between 2010 and 2011 it carried out “landslide drilling activities” on a number of Delta properties that weren’t represented by Keeling.

“People who were staying here at the resort were complaining about vibrations at night,” Suard recalled. “They were asking if we were having earthquakes.”

As state preps, residents make their case that the Delta Tunnel is an environmental crime story in full-view