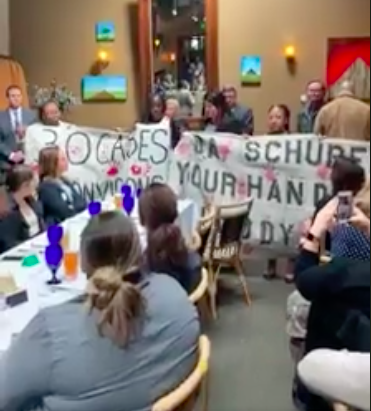 Schubert’s there to tell a female bar association about her office’s work using DNA to break ice-cold cold cases, most notably last year’s arrest of Golden State Killer suspect Joseph DeAngelo. The four black women are there to confront Schubert with a different record:

On Thursday, two members of the Sacramento chapter of Black Lives Matter were arrested after they and two other women bought tickets to a noon luncheon organized by Women Lawyers of Sacramento, which invited Schubert to give the keynote address at its monthly gathering.

According to cellphone video recorded inside Lucca’s banquet hall by BLM Sacramento member Sonia Lewis, the event’s emcee asked the four women, including BLM Sacramento chapter co-founder Tanya Faison, to take a seat as they unfurled a very long banner at the head of the room.

“Ladies, you need to take a seat. If you do not take a seat, I’m going to ask the restaurant to remove you,” the emcee says.

Schubert breaks in. “Hey Tanya, just so you know, when we’re done with this, I’d like to give you my card so that when I finish my speech, maybe we can set up a time,” she says.

Faison and the others say nothing. They hold their banner. The number “30” is writ large.

A man who identifies as the restaurant’s owner enters the frame and asks the women to sit or leave. They don’t move. They say nothing. Their silence expands. It’s awkward. Lunchers sit before empty plates, stone-faced. Schubert breaks the quiet.

People laugh and clap. One man tells the BLM women, “This does not help your cause.” They don’t move.

Attendees resort to small talk. The association moves onto other business. A judge updates attendees on personnel moves in Sacramento Superior Court. Abnormal normalcy. Schubert stands there. The women stand there. Impasse.

Thirteen minutes in, the police show up. Sgt. Lai Lai Bui takes point. She explains the women can leave on their own or face arrest. She’s calm and respectful. The protesters don’t leave. That’s taken as wanting Option B.

Officers escort demonstrators out in a procession as dishware clatters inside Lucca’s. Faison and one other demonstrator step into the back of a paddy wagon parked outside. They’ll be cited and released at the Richards Boulevard police substation. Lucca directs Bui to issue no-trespass orders to the others. She gets grief and fake names, including “Becky Pole,” date of birth: “the Fourth of July,” 1776. Bui shakes her head. The wagon departs. The scene evaporates.

It’s unclear at press time whether Schubert delivered her speech. As for Faison, she was due to appear on a civil rights discussion panel at the McGeorge School of Law later that evening.

No justice, no surprise

California’s revised use-of-force bill may not put more officers on trial, but supporters say it will ‘save lives’