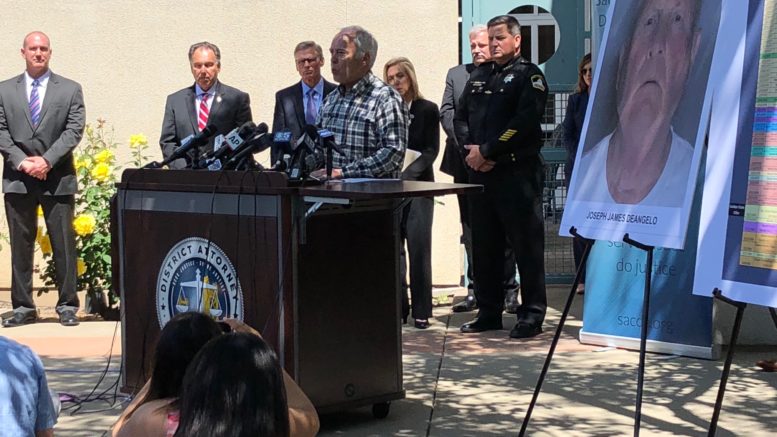 Bruce Harrington, whose brother and sister-in-law were fatally assaulted in their Orange County home nearly 40 years ago, says the surviving victims can sleep better tonight now that the suspected Golden State Killer is finally in custody.

Almost every district attorney had a personal story about the monster with many names.

Anne Marie Schubert remembered being a 12-year-old suburban girl in the mid-1970s, when the one they called the “East Side Rapist” was terrorizing that side of Sacramento County. Nancy O’Malley was volunteering as a rape crisis counselor in Contra Costa County in the late ‘70s, ministering to the survivors of a serial rapist who struck at least nine times before the trail seemingly went cold. Gregory Totten was a young law clerk with the Ventura County district attorney’s office in 1981, a year after Lyman and Charlene Smith were tied up and killed by someone authorities nicknamed the “Original Night Stalker.”

More than 40 years after California’s most notorious bogeyman started carving a sadistic path through bedroom after bedroom across the state, Schubert, O’Malley, Totten and other county prosecutors took turns recounting what first got them invested in catching the serial rapist and murderer who has also been called the “Visalia Ransacker” and “Golden State Killer.” On April 25, they revealed the suspect’s true name: Joseph James Deangelo.

The 72-year-old Citrus Heights resident and former police officer is suspected of carrying out upward of 50 sexual assaults and 12 murders over a decade and in at least 10 counties, said Schubert, now the DA in Sacramento County. On Tuesday afternoon, Deangelo was apprehended outside of his home in what Sheriff Scott Jones called “a perfectly executed arrest” that Jones believed caught the septuagenarian by surprise.

In answering questions from reporters, Jones confirmed Deangelo worked as a police officer at the height of the suspect’s violent spree. Between 1973 and 1976, Jones said, Deangelo worked for the Exeter Police Department in Tulare County; Deangelo later worked as an officer in the Auburn Police Department in Placer County from 1976 to 1979, when he was reportedly fired for shoplifting.

It has long been rumored that the Golden State Killer might have been working in law enforcement, and that’s how he managed to stay ahead of investigators all that time.
Authorities say they only identified Deangelo as their suspect in the decades-old cold case six days ago, thanks to a DNA hit inside of Sacramento’s crime lab, outside which today’s press conference was held.

“We found the needle in the haystack and it was right here in Sacramento,” Schubert told reporters.

Authorities aren’t releasing many details about the investigation that brought them to Deangelo’s door, except to point to a June 2016 press conference on the 40th anniversary of the East Area Rapist’s first known sexual assault, when local, state and federal law enforcement authorities recommitted to finding the suspect who had long eluded them.

Jones said the multi-agency team that was created to achieve that goal consisted of the “best and brightest” investigators, who were given “virtually unlimited resources” to pursue fresh leads and thaw old ones.

Sean Regan, special agent in charge of the FBI Sacramento, credited the public’s enduring interest in the case for keeping it at the forefront of law enforcement’s minds. Jones noted that his office still receives interested phone calls and tips on a regular basis.

O’Malley, the Alameda County DA, used her time at the podium to remind the public—and law enforcement—of the importance of taking rape kits out of evidence lockers and having their contents tested and entered into a DNA database tracking sexual assaults.

“This case is one example of so many, but a very stark example,” O’Malley said of the importance of using DNA evidence to apprehend serial predators.

According to Totten, now the DA in Ventura County, it wasn’t until the late 1980s that authorities recognized through the evolving science of DNA forensics that “we were dealing with a serial killer.”

Details about who and where Deangelo will be prosecuted are still being worked out, said Orange County DA Tony Rackauckas. He added, “This defendant’s been able to live free in a nice suburb in Sacramento. Our team’s going to make sure to never let him out.”