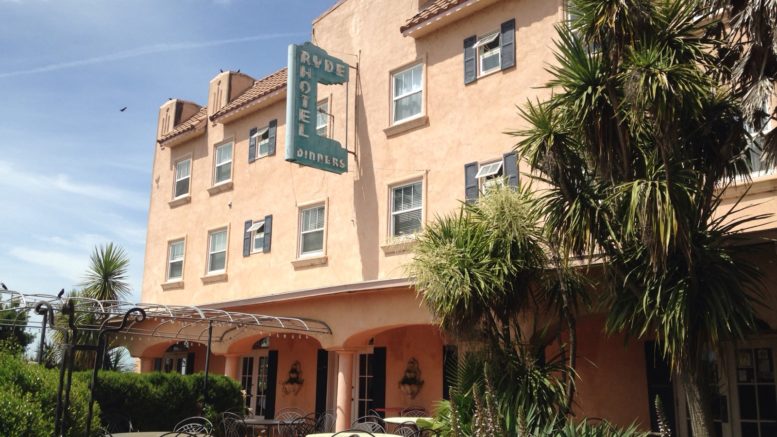 The historic Ryde Hotel is a riverside getaway lost in time. Photo by Scott Thomas Anderson.

In a dim corner of Giusti’s bar, near the photos of dangling sturgeon, a newspaper article from 1970 is nailed to the wall. It’s a tribute to Erle Stanley Gardner, whose smoke-drenched mysteries and lurid pulp novels made him a midcentury king of American crime writing. But for Gardner, the real mystery was here in this Walnut Grove bar. In the last decade of his life, Gardner haunted the lost waterways and rickety sanctuaries of the north Delta, desperately trying to distill the enigma of its twilit charm. And Giusti’s was one of his favorite spots.

Giusti’s lies south of Georgiana Slough, tucked away along the vine-laced channel that surrounds Dead Horse Island. The former trading post and ferry tavern was already a relic when Egisto Giusti bought it in 1912. Four generations later, Egisto’s family is still firing the skillets, pouring the wine and serving tipsy farmers who happily hide from the world. It’s a great place for laying low, enjoying plates of sand dabs, fried oysters, grilled salmon and burly calamari steaks, all paired with Delta Syrah and Giusti’s garlic-tinged, creamy linguine. An afternoon in this anglers’ Eden can evaporate the mystery around Gardner’s obsession.

West of Giusti’s, boaters eventually drift by the David Lynch-like dimensions of a hotel towering over the Sacramento River. Known as The Ryde, this old three-story retreat was built in the Jazz Age and once had a secret rum-runner’s tunnel puncturing the levee under its Art Deco shadow. Today, the historic landmark still rents rooms that look out on skiffs and trawlers gliding on the river. On Sunday mornings, the Ryde’s nostalgic dining room is open for brunch, offering a chance to wander by the Egyptian statues in its halls and up the passage of its marble-carpet staircase. And then there’s venturing into the hotel’s lower ballroom, a gala hall reminiscent of the one Stephen King conjured in The Shining. To linger in the empty chamber is to almost hear the voices from the Prohibition-era parties hosted here. Don’t miss a chance to explore the Delta’s version of Hotel California.

Another lapping channel of local memories flows along the edge of Sutter Island. It was here the ambitious captains and riverboat gamblers of yesteryear stopped for supplies on their way to the capital: It’s called Steamboat Landing, and it’s also not far from where one of those grand paddlers — a vessel called The Washoe — went to its dark, river-grave in the fall of 1864. The Washoe was racing down Steamboat Slough against a paddle boat called the Chrysiopolis. Rival captains were trying to see who could get from Rio Vista to Sacramento fastest when The Washoe’s boiler blew. Some 50 people died in the water that night. These days, the landing that The Washoe didn’t quite make it to is a covered with a century-old pear orachard owned by a Delta farming clan, the Neuharths. It’s a great vista to stop, throw a fishing line and sip on some Hemly pair cider, a drink made by a family whose rustic Victorian mansion looms just down the river.

North of Steamboat Landing, vineyards start rioting across Merritt and Lisbon islands. Those blooming rows are the backbone of Clarksburg’s Old Sugar Mill, a massive Depression-era factory converted into a brick maze of elegant tasting rooms. Word has gradually gotten out about the top-tier wines that are poured here, including Larry Dizmang’s mind-blowing chenin blanc, Todd Taylor’s vibrant vintages of cabernet sauvignon and Matt Cline’s Evangelho zinfandel, made from 130-year-old vines down in the South Delta.

While the Old Sugar Mill’s a fun place for the Dionysian splurge, it’s hardly an unknown corner of the region. Julietta Winery, on the other hand, is a garden hideaway quietly nestled on the back end of Clarksburg’s sprawling fields. It’s a tribute to casual tasting, with shaded and sunlit patios flanked by olive trees, oleanders and a flower-studded waterway. It’s the perfect place to kick back, drink a Rhone blend and maybe watch a cottontail rabbit duck by — and to contemplate the mysteries of the Delta, California’s least known and most threatened treasure.